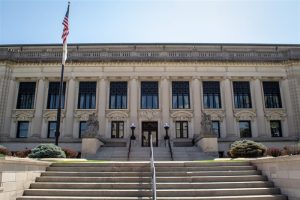 SPRINGFIELD – The Illinois Supreme Court preserved a 130-year prison sentence for a man convicted of rape and murder, Ashanti Lusby, who was 16 years old at the time of the offense.

The 6-1 decision, issued Thursday, Oct. 22, prompted criticism from advocates within the juvenile justice reform movement that are seeking to eliminate extreme prison sentences for minors.

The majority of the state’s high court reversed a lower court ruling, and decided that Lusby’s 2002 sentencing hearing did not violate recent U.S. Supreme Court case law requiring a sentencing judge to consider a juvenile’s age and factors related to youth.

Justice P. Scott Neville, the only Illinois Supreme Court justice who disagreed with the majority, wrote in his dissenting opinion that the Will County trial judge who sentenced Lusby did not properly consider Lusby’s age, youth-related factors or the “crucial factor” of Lusby’s potential for rehabilitation.

Linda Olthoff, one of the attorneys who represented Lusby, said in a phone call she was disappointed in the court’s decision.

“There should be a presumption against sentencing juveniles to life in prison. The court should have to first determine that (the juvenile) is so beyond rehabilitation and I think we would maintain that that didn’t really happen here,” said Olthoff, who is an assistant appellate defender at the Office of the State Appellate Defender.

A spokesperson for the Illinois Attorney General’s Office, which represented the state in this case, did not respond to a request for comment.

In his case before the court, Lusby was asking for permission to file a petition challenging his 130-year sentence as unconstitutional cruel and unusual punishment, based on the U.S. Supreme Court’s decision in Miller v. Alabama (2012) and Montgomery v. Louisiana (2016).

In Miller (2012), the court ruled that mandatory life sentences for juveniles are unconstitutional because it qualifies as cruel and unusual punishment.

In Montgomery (2016), the court clarified that its decision in Miller “requires a sentencer to consider a juvenile offender’s youth and attendant characteristics before determining that life without parole is a proportionate sentence,” according to the opinion.

In 2010, Illinois raised the minimum age threshold for juveniles from 16 to 17 for misdemeanor offenses. State law still allows for 17-year-olds charged with felonies to be treated as adults.

In Illinois, 16-year-olds can be transferred to adult court for certain crimes, including murder, rape and certain drug or gun offenses.

Lusby’s sentence for the rape and murder of an elementary school teacher in Joliet was not a mandatory sentence. But his 130-year sentence is a de facto life sentence because it amounts to a lifetime in prison.

Shobha L. Mahadev, a clinical professor at Northwestern University Pritzker School of Law, said when a court is presented with an appeal challenging a juvenile’s de facto life sentence, like it was in Lusby’s case, the court must decide whether the juvenile’s sentencing hearing was “constitutionally sufficient.”

“And, so here we have a 130-year sentence and the question is: Is Mr. Lusby’s 2002 sentencing hearing constitutionally sufficient?” questioned Mahadev, who works at the law school’s Children and Family Justice Center, which submitted a legal brief in support of Lusby’s argument.

The majority of the Illinois Supreme Court agreed that the trial judge appropriately considered Lusby’s age and factors related to youth at the sentencing hearing.

“The trial court presided over the case from beginning to end and considered (Lusby’s) youth and its attendant characteristics before concluding that his future should be spent in prison. (Lusby’s) de facto discretionary life sentence passes constitutional muster under Miller (2016),” Justice Mary Jane Theis wrote on behalf of the majority.

Neville, who is the only Black justice sitting on the Illinois Supreme Court, wrote that the trial judge “focused on the brutality of the crime and the need to protect the public, with no corresponding consideration given to (Lusby’s) youth and its attendant characteristics,”  resulting in an unconstitutional de facto life sentence for Lusby.

“There is no question that juvenile offenders who commit heinous murders deserve severe punishment. However, we cannot lose sight of the fact that juveniles are different from adults due to a juvenile’s lack of maturity, underdeveloped sense of responsibility, vulnerability to peer pressure, and the less fixed nature of the juvenile’s character,” Neville wrote.

The majority of the Illinois Supreme Court decided that Lusby is not entitled to a new sentencing hearing since his sentence didn’t violate the ban on cruel and unusual punishment, or the U.S. high court’s precedent in the Miller and Montgomery cases.

Mahadev said she takes issue with this decision to foreclose the possibility of a new sentencing hearing for Lusby, who is now 41-years old.

“I think that we should be able to go back and ensure that these individuals who are now serving  life without parole and other extremely long sentences for crimes that occurred in their youth, have received the comprehensive, youth-centered consideration that is now required today, and that did not happen for Mr. Lusby,” she said.

Elizabeth Clarke, founder and president of the Juvenile Justice Initiative, said she was profoundly disappointed with the outcome of the case.

“You really have to be simply inhumane to have a sentence that is a de facto life sentence, and it’s inconsistent with what’s been evolving in our society, in terms of what is appropriate and what is proportionate,” Clarke said.

For example, last year the Legislature amended state law to allow certain juvenile offenders with lengthy sentences to be eligible for parole after 10 or 20 years.

“But I do think cases like this demonstrate that there is a population that we have left behind in this consideration – people who are serving long sentences that occurred prior to some of our more recent scientific knowledge about how children grow and develop, and legal developments. I think that it is right and appropriate for the General Assembly to examine that and continue to look at this population, and see what can be done to more proportionately address the harm that may have been caused,” she said.

“No one’s saying that we shouldn’t hold people accountable for their actions, even young people,” she added. “The question is whether or not we can do so in a comprehensive way that accounts for their youth. And there are individuals, like Mr. Lusby, who have been left behind, both by cases and by legislation. I think it is appropriate and timely to address that.”