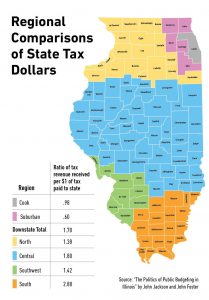 Illinoisans living outside of Chicago and the collar counties receive a higher return on their state tax dollars — as much as $2.88 for every $1 paid — according to a recent study from Southern Illinois University’s Paul Simon Public Policy Institute.

SIU Public Administration Professor John Foster and John Jackson, a visiting professor with the institute, examined tax revenue and state expenditures by geographic regions based on budget data from fiscal years 2013 through 2016. During the Illinois Farm Bureau Board’s July meeting, the Illinois Government Committee was briefed on the professors’ report entitled “The Politics of Public Budgeting in Illinois.”

Jackson told FarmWeek he and Foster tested a regional perception they’d heard for decades “that we in southern Illinois get the short end of the (tax revenue) stick and support urban counties and Chicago.” That perception fueled recent outcomes in central and southern Illinois ballot initiatives, he noted.

Rather than receiving the lion’s share of state tax revenue, Cook County and the five collar counties contribute more to the state than the state spends in those counties in return, based on data from the bipartisan Commission on Forecasting and Government Accountability. In 2016, Cook County generated $12.43 billion; suburban counties, $8.5 billion; and downstate, $8.2 billion. In return, the state spent in Cook County, $12.18 billion; suburban counties, $5.1 billion; and downstate, $13.9 billion.

“In these polarized times when people are told things they want to hear as opposed to the truth, we need the right information,” said Mark Raney, IFB associate director of state legislation.

The budget years the professors studied included the two years during Gov. Bruce Rauner’s administration when the state had no budget, which was especially hard on southern Illinois. “Because in downstate we do get a bigger part of our total revenues from the state, the two years without a state budget and the cuts entailed hurt downstate, especially southern Illinois, harder than it hit northeastern Illinois,” Jackson noted.

Most of the state universities and prisons are located downstate as are state parks and recreation areas, compared to Cook County and the collar counties. Even though the budget impasse reduced spending for higher education and other state expenditures, the state still spent significantly more in downstate regions than it collected in revenue from downstate residents.

Additionally, Medicaid, which often is thought of as an urban program, is the largest state expenditure of General Revenue Fund dollars. According to the latest data from the U.S. Census Bureau and the Illinois Department of Healthcare and Family Services, approximately 25.5 percent of downstate’s population is enrolled in the Medicaid program. In comparison, less than 24 percent of Cook County’s and the collar counties’ populations are in Medicaid.

“It’s important for people to understand the facts,” Jackson said. “We make a case for opinion to be driven by fact. We have a lot of division in the state. We make the case that leaders in this state ought to make more of a case about what is positive and healthy about Illinois rather than so often emphasizing the negative and what divides us.

Raney agreed: “It is important for Farm Bureau and the public in general to hold elected officials accountable for what they try to say is happening. It is totally fair and right where there are differences of opinion; but on any issue, we need truthful information before an honest opinion can be made.”