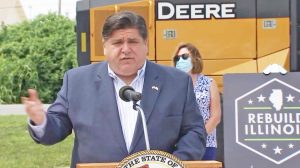 Gov. J.B. Pritzker speaks at a news conference Tuesday, July 21 in Collinsville in unveiling the state’s six-year capital infrastructure plan. Each year IDOT unveils its multi-year plan, and this year’s did not take into account anticipated revenue losses resulting from the COVID-19 pandemic, according to a summary of the plan. (Photo courtesy of illinois.gov)

IDOT is tasked with unveiling a multi-year plan each year to detail how it will spend transportation dollars on state and local highway transportation systems. For the current fiscal year, the investment in road and bridge infrastructure totals $3.15 billion, according to the governor’s office.

Current funding levels would allow the multi-year plan to include 3,356 miles of road improvements and 8.4 million square feet of bridge deck in total over the next six years.

The infrastructure spending largely relies on revenue from the motor fuel tax — which was increased on July 1, as it will every year forthcoming under the new state law — among other driving-related fees.

According to an overview of the multi-year plan on the IDOT website, however, revenue estimates were not adjusted to account for economic impacts of the COVID-19 pandemic and associated stay-at-home orders.

“Due to the unprecedented COVID-19 pandemic and national stay-at-home guidance, the reduced consumption of gas is expected to cause a decrease in motor fuel tax revenue that would be deposited into the state’s road and state construction fund,” according to IDOT’s summary of the plan. “It is not yet known what the actual decrease will be. Therefore, no adjustments were made to the (multi-year plan).”

“The department will continue to monitor the data and make any adjustments deemed necessary as actual revenue impacts become known,” the summary continued. 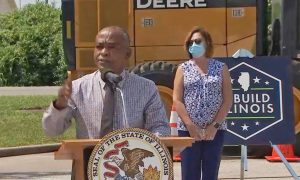 While the attendees of a news conference unveiling the plan touted the Rebuild Illinois package, which passed in 2019, acting IDOT Secretary Omer Osman said the COVID-19 pandemic presented some unforeseen challenges.

“The multi-year plan keeps us on track during these uncertain times,” Osman said at an event in Collinsville. “While we are not cutting or delaying projects at this time, we will continue monitoring the impact on future revenue to ensure we are investing taxpayer resources wisely. Clearly, COVID-19 is not going to be something that lasts for a few months, but likely impacts our decision making for years to come.”

Despite the pandemic, Osman said, Pritzker allowed road work to continue by deeming construction workers essential in his executive orders.

That allowed year one of work on the Rebuild Illinois plan to continue despite state stay-at-home orders, so the first year of the plan saw $2.77 billion in improvements, with $2.15 billion to the state system and $616 million in the local system.

“That standard puts an end to the practice of letting roads and bridges in Illinois deteriorate until they’re in just terrible shape,” the governor said. “Instead we’re investing on the front end saving money for taxpayers.”

Pritzker touted the plan as one that would create jobs in a difficult economic climate in Illinois and across the U.S.

“Even in a pandemic — especially in a pandemic — our transportation systems connect the lives of our residents and our communities,” Pritzker said. “…The Multi-Year Plan we’re announcing today provides funding to reconstruct over 3,300 miles of roads and over 8 million square feet of bridges — and, more importantly, create and support hundreds of thousands of jobs over the next 6 years for hardworking Illinoisans across our state.”

Projects for the plan are selected by safety criteria such as crash history, pavement conditions and traffic volumes.