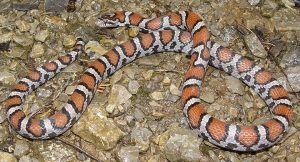 The eastern milksnake is found across Illinois and ranges from 24 to 36 inches in length. (Photo courtesy of IDNR)

Gov. J.B. Pritzker has designated the eastern milksnake as the official snake of the State of Illinois.

House Bill 4821 began as an initiative led by Gentry Heiple, a seventh-grader at Carterville Junior High School in Williamson County.

Gentry was inspired to advocate for this legislation after reaching out to State Rep. Dave Severin (R-Benton) to inquire about how a bill becomes a law. Gentry conducted all the research and ultimately chose the eastern milksnake. He presented his idea to the House of Representatives State Government Administration Committee who gave unanimous consent.

The eastern milksnake is found across Illinois – it lives in fields, woodlands, rocky hills, and river bottoms. The milksnake ranges from 24 to 36 inches in length, has smooth scales, large blotches with brown or black borders, and a Y- or V-shaped mark on its head. It is not a poisonous snake and are even bred as pets.

“I decided to do this bill to try and highlight the good and importance of snakes all over,” said Gentry Heiple. “And by doing this I was able to visit the capitol and meet some of the most important people in Illinois. And I am very grateful and appreciative of all the people who supported me and voted yes on the bill. I was surprised to see the amount of people with such fear be so intrigued and supportive of this snake bill.”

The governor praised the young student for her civic involvement.

“I couldn’t be prouder of our young Illinoisans, like Gentry Heiple, who have gotten involved in our state’s legislative process,” said Pritzker. “I am honored to sign this bill into law declaring the eastern milksnake the official snake of Illinois. Gentry, may you continue to use your voice to advocate for change — making our state better one bill at a time.”

State Rep. Dave Severin (R-Benton) added, “I truly enjoyed working with Gentry and his mother on this project. Gentry had the idea, did all the research, and bravely presented his idea to the House State Government Administration Committee. I am especially pleased that this bill is receiving the Governor’s signature, and that my office was able to help facilitate connecting a local student to the legislative process.”

Illinois recognizes several other official symbols of the state, including state bird (the Northern Red Cardinal), state flower (the violet), state tree (the white oak), and state fish (the bluegill). Pritzker signed a bill designating dolostone as the state rock earlier this month after a successful campaign also carried out by students learning about the civic process. More officially designated state flora and fauna can be found on the Illinois DNR website.