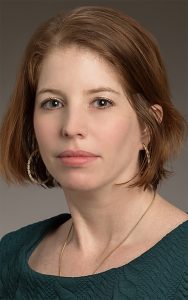 Alison Dickson, a senior instructor in the School of Labor and Employment Relations at the University of Illinois Urbana-Champaign. (Photo by L. Brian Stauffer)

As many as 61 percent of hourly workers in Illinois are underemployed, with up to 65 percent and 70 percent of Black and Latino workers, respectively, logging fewer hours than they would like to work. These numbers underscore the need for the state to adopt a fair-workweek law, says Alison Dickson, a senior instructor in the School of Labor and Employment Relations at the University of Illinois and one of the paper’s co-authors.

The research, which surveyed more than 3,300 workers in late 2019, examines eight key dimensions of work hours and schedules, and their distribution by types of jobs and workers across 23 different industries, including those covered by Chicago’s recently implemented fair-workweek law.

Dickson and co-author Lonnie Golden of Pennsylvania State University, Abington found that underemployment is widespread but relatively higher in the industries covered by the fair-workweek ordinance such as food services, hospitality, retail and warehousing.

“We collected this data just before the pandemic, and even then we found an employment situation for low-wage hourly workers that was pretty dire – much worse than what we imagined,” said Dickson, also an affiliate of the Project for Middle Class Renewal. “The safeguards we have in terms of labor laws really weren’t’t doing much to help a significant proportion of the Illinois workforce, and that has had very damaging effects for workers’ livelihoods and well-being. And now with the pandemic and its attendant economic aftershocks, it’s undoubtedly gotten worse for those workers.”

White-collar workers at salaried jobs are mostly weathering the economic storm created by the pandemic, but workers who are part-time or contingent employees were struggling before COVID-19 hit, and “are really struggling now,” Dickson said.

“Those workers were just one or two economic shocks away from suffering adverse consequences, and now we’ve had multiple economic shocks since last March,” she said. “One bit of good news is that Chicago’s fair-workweek ordinance is the most expansive in the country and it covers several industries whose scheduling practices are problematic but not covered in other states or cities. Expanding the law statewide would benefit workers greatly, at little cost to employers.”

The research also documents several adverse consequences of insecure work hours on workers, such as job satisfaction, work-life balance and other indicators of personal and financial well-being.

“Practices such as on-call work, short advance-notice scheduling and little employee control over schedules exacerbate difficulty paying housing expenses,” Dickson said. “For example, one in three workers of color whom we surveyed pre-pandemic experienced such housing-payment problems. What that means now is that a large proportion of workers in our state may be food and housing insecure due to the pandemic, some even on the verge of homelessness.

“In certain sectors such as retail and food service, where the preponderance of workers who are working part time want more hours, instead of giving their employees more hours, many employers keep them underemployed by hiring new part-time or temporary employees. Having stable, reliable work hours and schedules matters now more than ever for the well-being of those employed throughout the state in Illinois.”

And it’s not just employees who benefit from more predictable work schedules, Dickson said.
“When workers have greater stability, predictability and adequacy of work hours, they’re better workers, which is a boon to employers via improved employee productivity and reduced turnover,” she said.

“Those benefits alone would offset much of any initial cost of adopting more stringent scheduling standards. Most of these jobs don’t have to be low-quality jobs. The quality of these jobs has been degraded by the problematic scheduling practices.”

The research suggests there’s still a long way to go toward realizing the goals of reforming hours and scheduling practices in Illinois workplaces and its labor market, Dickson said.

“The fair-workweek law implemented in Chicago last summer is really just a drop in the bucket,” she said. “It’s the most expansive in the country because it covers seven industries, and those industries were the ones that we found to be the most prone to poor scheduling practices. The stronger, pre-pandemic labor market masked these practices and their consequences, so we now realize that many workers were not doing as well as we thought. With this rich, pre-pandemic snapshot of the labor market, we’ve given policymakers a real baseline of where we were at, and it was not a pretty picture for our most vulnerable workers.”

The paper is part of the Project for Middle Class Renewal, a research-based initiative tasked with investigating the labor market institutions and policies in today’s economy while elevating public discourse on issues affecting workers. The project is directed by U. of I. labor and employment relations professor Robert Bruno.