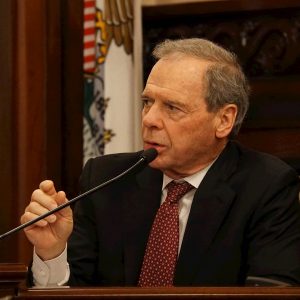 Senate President John Cullerton speaks during a Senate Executive Committee hearing Thursday, Nov. 14 at the Capitol in Springfield. After Thursday’s end of the veto session, Cullerton announced he would be retiring from the Senate sometime in January. (Photo by Lee Milner of Illinois Times)

SPRINGFIELD — Senate President John Cullerton will resign from the General Assembly sometime in January, he told his caucus in a meeting after the fall veto session concluded Thursday, Nov. 14.

A definitive date has not been set.

The Chicago Democrat spent almost 40 years in the General Assembly, first serving in the House before moving to the Senate. He was elected president of that chamber in 2009, and one of his tasks was presiding over the impeachment trial of former Gov. Rod Blagojevich.

“I’ve had the pleasure to work with a body of Senate members who were equally resolute in moving Illinois forward and making the changes necessary to grow our economy and build a better future for our children and our communities,” Cullerton said in a statement.

“I look forward to watching this august chamber and all you will accomplish,” he continued. “As we all know, there will be bumps in the road, but they will be paved over with new ideas and solutions, and a constantly changing body of members who are eager to bring their own vision and signature to our illustrious Illinois Senate.”

Democratic Gov. J.B. Pritzker said he was “surprised” by the news. Cullerton is his senator.

As of 5:30 p.m. Thursday, he had not had a chance to speak to the Senate president “personally,” but Pritzker said he is “very sorry to see him leave his position.”

“I’ve known him for a number of years,” he said on his way out of the Statehouse. “I’m especially grateful for his having worked together with me in partnership with so many other members to get our agenda passed in the Legislature this year.”

Asked if he would play any role in finding a new leader for the chamber, the governor said he “hadn’t thought about it.”

In a statement, Cullerton pointed to a list he could “humbly brag” about accomplishing during his tenure: “two capital bills, marriage equality, abolished the death penalty, school funding reform (and) immigration reform.”

He has been a champion of anti-tobacco legislation during his time in the General Assembly. Most recently, he is sponsoring a bill that would ban flavored electronic smoking devices. He also supported a law raising the minimum age to purchase nicotine products, banning smoking from public spaces and raising the usage tax on tobacco products.

“I have known John for many years, but it has been during the last two years … that I have seen firsthand the integrity, honesty, and humor that he brought to the responsibilities his office entailed,” he said in a statement. “We may not have always agreed on how best to address the issues facing the state, but there can be no denying John always put the people of Illinois first.”

The Senate president’s announcement comes in the wake of calls for ethics reforms in the Legislature and two of his caucus members being embroiled in federal legal troubles.

The Statehouse office and home of Sen. Martin Sandoval, D-Chicago, were raided in September by federal officials. No charges have been filed against him.

And federal embezzlement charges were filed against Sen. Tom Cullerton, from Villa Park. He has pleaded not guilty, and is a distant cousin of John Cullerton.

The Senate president is an attorney, and a partner at the law firm Thompson Coburn, according to his website.