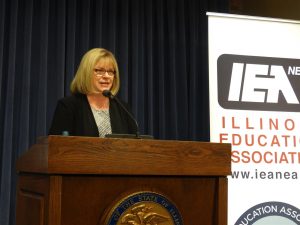 Kathi Griffin, president of the Illinois Education Association, discusses a new survey about attitudes toward Illinois public schools during a news conference Tuesday at the Capitol in Springfield. (Photo by Peter Hancock/Capitol News Illinois)

SPRINGFIELD — Most adults in Illinois give the state’s public school system only a so-so grade, but they give slightly higher marks for their own local schools.

That’s according to a new survey commissioned by the Illinois Education Association, the state’s largest teachers union. The survey, called the State of Education Report,  also found broad public support for increasing funding for K-12 education and raising educator salaries.

“High-quality public education remains a high priority, and while there is no consensus on how to fix schools, funding and quality teachers are seen as a key,” IEA President Kathi Griffin said during a news conference Tuesday.

The survey of 1,000 adults in Illinois was conducted Nov. 13-21 by Normington-Petts & Associates, a Democratic polling firm, and We Ask America, a Republican-leaning firm. The survey had a margin of error of plus or minus 3.1 percentage points.

Griffin said the survey revealed no clear consensus about how to improve the state’s school system, although 59 percent said having high-quality public schools should be a “top priority.” The only other issue that ranked higher in the survey was cleaning up corruption in state government. Reducing crime, balancing the state budget and lowering taxes all ranked lower.

The survey did not ask respondents where they think the additional money should come from. Griffin, however, said she believes the state needs to continue funding the Evidence Based Funding program that lawmakers passed in 2017, and that it should do so with revenue from the proposed graduated income tax amendment that will be on the November general election ballot.

“(T)hat will assist in making sure that our schools have the resources they need so that we can provide a quality education for all of our students,” she said.

The survey was conducted just months after Illinois lawmakers passed measures aimed at relieving the state’s teacher shortage. Those included bills raising the minimum wage for teachers to $40,000 by 2023 and easing some of the state’s licensing requirements. Griffin, however, said it will take time for the effects of those new laws to set in.

Just over half of all respondents in the survey said they believe teachers in their communities are paid too little, while only 8 percent said they were paid too much. One-third said they thought teacher salaries were about right.

The survey also found support for other measures aimed at reducing the state’s teacher shortage, including lowering the minimum retirement age for teachers in the Tier 2 retirement system — those hired since 2011 — to 60 instead of 67.