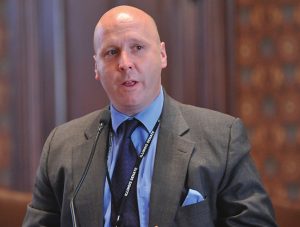 SPRINGFIELD – A federal judge in Chicago handed down a one-year prison sentence Tuesday for a former state senator who once chaired the Senate Labor Committee.

Tom Cullerton, a Villa Park Democrat, pleaded guilty earlier this year to one count of embezzlement for receiving salary and benefits from Teamsters Joint Council 25 as a purported union organizer even though he admitted to doing little or no work for the union.

Cullerton, 52, was first elected to the General Assembly in 2012 to represent the 23rd District, which at that time spanned a portion of northern DuPage County. He had previously worked as a truck driver and was a member of a local Teamsters union.

In March 2013, shortly after being sworn into office, he was given a job at Teamsters Joint Council 25 and he remained on the payroll until February 2016.

Cullerton was indicted in August 2019 on 40 counts of embezzlement. But he maintained his innocence and continued to serve in the Senate, although he was stripped of his chairmanship of the Labor Committee.

In March of this year, however, he entered a plea agreement with federal prosecutors in which he admitted to one count of embezzlement. He then resigned his Senate seat and was replaced by former state Rep. Diane Pappas, who is not running for a full term in that office.

In addition to his prison sentence, U.S. District Judge Robert W. Gettleman also ordered Cullerton to repay the union $223,828, an amount that reflected the fact that he had previously made a $25,000 restitution payment. As part of the plea agreement, prosecutors agreed not to seek forfeiture of his Villa Park residence

Prosecutors initially asked for an 18-month sentence, which they said would reflect the seriousness of the crime.

In a court filing earlier this month, they noted that after Cullerton lost his job at Teamsters Joint Council 25, he took another “do-nothing” job as a salesman for a video gaming company in 2017 where he received a salary of $1,000 a week, an amount that was later doubled to $2,000 a week, even though he brought in little if any business for the company. He was not charged in relation to those payments.

He continued to receive those payments, prosecutors argued, until the investigation into his Teamsters employment became public.

Cullerton’s defense attorney, however, argued for a more lenient sentence of three years’ probation, with an order to perform community service and pay restitution, arguing that Cullerton was currently employed doing shift work at a warehouse and that money continues to be a source of stress for his family.

“Tom is a good and decent man who made a terrible mistake,” attorney Daniel Collins wrote in a court filing. “He should not have accepted the Teamsters salary and benefits without doing enough to earn them. Tom will live the rest of his life with deep regret and shame, but he is determined to make it right and continue in some way to help his community.”