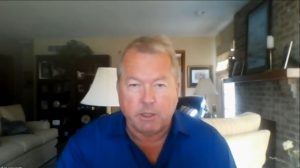 SPRINGFIELD — An Illinois Senate committee met for the state’s first-ever virtual hearing Thursday in a Zoom teleconference focusing on diversity in state contracts granted through the Illinois Tollway.

The new Senate rules for virtual hearings were approved by the chamber in the abbreviated May legislative session. They allow the Senate president, in consultation with the minority leader, to create a process in which committee votes can be taken, but such a process has not yet been approved.

The Aug. 13 Senate Transportation Committee hearing — which state Sen. Ram Villivalam, D-Chicago, called to order shortly before 10 a.m. — was subject matter only, meaning there could be discussion, but no votes would be taken.

The committee was previously chaired by state Sen. Martin Sandoval, a Chicago Democrat who resigned his senate seat last year before admitting in a January plea deal that he had received more than $250,000 in bribes from a red light camera company over a three-year period.

Sandoval was also one of the lead architects of the capital infrastructure package passed in 2019, which created a revenue stream for road and bridge projects by raising the gas tax and other transportation-related fees. The revenue that legislation produced funds the $45 billion Rebuild Illinois capital improvements plan.

Villivalam said the purpose of committee hearings like the one called Thursday was to increase transparency in state contracts.

“Given the fact that we’re in the midst of a pandemic, civil unrest and an economic downturn, I would argue now more than ever we must be responsible stewards of taxpayer dollars, and we must ensure the safety of our residents,” Villivalam said. “With that in mind, my goal today and those of this committee are to listen and ask meaningful questions of all involved and figure out the best path forward on transparency and diversity goals at the Illinois Tollway.”

Much of the discussion centered on making sure minority groups, women and disadvantaged populations were involved in construction projects, particularly for roads.

Jose Alvarez, the Tollway’s executive director, said about 30 percent, or $167 million of a total $545 million set aside for Tollway construction projects in 2020, will be spent on disadvantaged, minority or women-owned business enterprise firms.

He said $73 million of the Tollway’s $121 million professional services contracts for 2020 will be spent with such firms. Those are vast improvements from the first three quarters of 2019, Alvarez added.

“We’ve done a lot of outreach to reach out to African American, Latino and women contractors, to tell them that the Tollway is open for business,” he said. “When people feel like they’ve been intentionally left out, the only way to change that is to be just as intentional of inviting them back in.”

Michael Sturino, president and CEO of the Illinois Road and Transportation Builders Association, said red tape often gets in the way of greater participation.

St. Charles Sen. Don DeWitte, the Republican spokesperson on the committee, questioned leaders of the Tollway on a recent Daily Herald news report that the Tollway “acted illegally in its handling of unsuccessful bids from two construction companies on separate projects, a move that caused delays and contrasts with agency goals of strengthening procurement policies.”

The Daily Herald’s report was based on a Freedom of Information Act request for documents from Illinois’ Chief Procurement Officer for General Services.

“The two firms in regard to these concerns today are long-time Tollway contractors that have met diversity goals previously and meet those diversity goals currently on other projects they’re involved in,” DeWitte said.

According to the Daily Herald, Chief Procurement Officer Ellen Daley concluded that the contractors weren’t properly notified that their bids fell short, “which caused them to lose out on a chance for reconsideration.” Daley also said, however, that the Tollway did not act in bad faith.

DeWitte said he requested documents regarding the contracts from the Tollway eight days before the hearing, but they had not been provided. The Tollway said they were working on producing them.

Kathleen Pasulka-Brown, general counsel for the Tollway, said the two bids in question missed Disadvantaged Business Enterprise, or DBE, goals. DBE certifications are given to businesses that are at least 51 percent owned by ‘disadvantaged’ members of the population, which can include women, minorities, persons with disabilities and veterans.

According to Brown, both companies are still “regularly awarded millions, indeed 10s of millions of dollars in Tollway contracts,” but didn’t meet the diversity requirements for that specific bid.

While the companies were the low bidders, each of them missed DBE goals by 9 percent or more, she said.