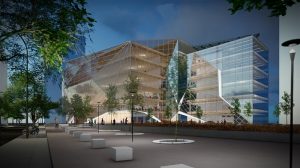 Pictured is a preliminary conceptual rendering of the future Discovery Partners Institute site in Chicago. Current plans are for the facility to be built in downtown Chicago on land donated by Chicago developer Related Midwest. (Image courtesy of dpi.uillinois.edu)

SPRINGFIELD — University of Illinois faculty say an ongoing statewide investment in a public-private research network is key to boosting the state’s economy.

The Discovery Partners Institute, a UI-led research and workforce development hub based in Chicago, is the flagship program of the Illinois Innovation Network that seeks to invest in 15 regional hubs affiliated with the UI system to spur economic growth with state funding.

The goal of IIN is to create technology jobs in Illinois and train the state’s workforce to fill them.

UI representatives testified before the state Senate Higher Education Committee during a subject matter hearing on Monday, claiming that despite Illinois’ success in business and STEM education, the state hasn’t seen the economic boon to match its academic output.

“So, broadly, the great thing about Illinois is it is a place where talent gets created, it has tremendous capabilities in creating tech talent,” DPI Director Bill Jackson said in his testimony.

But this hasn’t translated to the private sector, leading to a “brain drain” of Illinois-educated tech workers, he said.

“But, our issue, right, is we lose that talent,” Jackson said. “It goes to the coast, it goes other places and it doesn’t stay within the state. We do all the development and we don’t get the essence of all that great capability we’re building.”

Illinois is 31st in state economic growth, 46th in private job growth, and 62 percent of computer science graduates leave the state after receiving their degree, according to the university’s representatives. On top of that, half of all start-ups that raise more than $5 million relocate.

The UI’s tech programs are also not racially equitable.

In 2019, less than 2 percent of UI system computer and data science graduates were Black, while 5 percent were Latino. The UI representatives contended that this disparity limits the workforce that can be developed to address personnel shortfalls in the tech industry and keeps Illinois behind other states like California and Washington, which have seen similar levels of academic success as Illinois but have reaped larger growth in the private sector.

The solution, according to UI’s presentation, is continued investment in computer science classes and computer science teachers in public schools zoned for underserved communities. They also promote programs that target Black and Latino K-12 students to establish a pipeline for earning computer and data science degrees at Illinois universities.

DPI’s Chicago campus, in a development area called The 78, is scheduled to be completed by 2025. Most of the other hubs are situated on public university campuses and in existing structures and are scheduled to be operational over the next few years.

Hubs will have an established focus based on their region and the university that houses them. Focus areas include computing and data, food and agriculture, entrepreneurship and environment, and water.

An economic impact statement crafted by the Boston Consulting Group in late 2019 claims DPI and IIN will generate $198 billion in economic activity and create or fill 48,000 jobs over the next 10 years. The study says that by the 2029 fiscal year, the project will create or fill more than 9,500 jobs annually, with 4,500 of those going to individuals from underserved backgrounds.

State Sen. Chapin Rose, R-Mahomet, who represents the Champaign area including UI’s flagship campus, pressed UI system witnesses on how effective their project would really be in cultivating tech talent in the state.

Rose cited a Wall Street Journal article discussing how the world’s largest tech companies like Google, Amazon and Microsoft are creating 6-month vocational programs that are meant to serve as a competing and equal credential to a 4-year degree.

“It seems to me the private marketplace is now going to cannibalize our students,” Rose said. “What is this space that DPI is trying to capture where it is a market leader that is not already captured by someone else, not captured by Austin, not captured by Silicon Valley, not captured by Boston or by North Carolina?”

Jackson said that while Google and other big tech corporations are filling one gap in the marketplace, DPI will create the capacity for more tech jobs in the state. He also said that its different hubs and focus on creating pipelines in K-12 education allow it to fill multiple market gaps outside of just data science.

Rose said he was pleased with the idea of DPI and IIN for boosting Illinois’ economy through the technology sector, but he cautioned the state “not to create a wheel that’s already been created somewhere else.”

DPI and IIN were originally approved under former Gov. Bruce Rauner in 2017 but had funding delayed over the course of his term. The state released $500 million in state funds for DPI and IIN in February, with another $501 million in non-state funds being committed to both projects.

At the senate committee on Monday, UI system representatives said half of the state funds will go to DPI and the other half to the 14 other hubs in the network.

According to UI representatives, only a portion of that money has been distributed for the planning and construction of DPI and five other hubs so far.