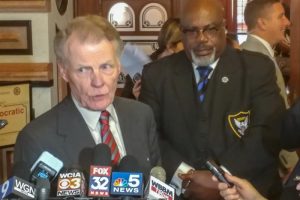 House Speaker Michael Madigan is pictured in a file photo at the Illinois State Capitol in 2019. He is now the subject of a Special Investigating Committee in the Illinois House due to his alleged ties to utility giant Commonwealth Edison. (Capitol News Illinois file photo)

SPRINGFIELD – Illinois lawmakers are free to pursue their own investigation into House Speaker Michael Madigan’s role in a bribery scheme involving utility giant Commonwealth Edison, as long as they don’t specifically ask witnesses what information they’ve shared with federal investigators or a federal grand jury.

That was the word late Thursday, Sept. 17 from John Lausch Jr., the U.S. Attorney for the Northern District of Illinois.

“We recognize the (Special Investigating Committee’s) separate and independent responsibilities, and therefore, we do not object generally to the SIC’s pursuit of testimony and production of documents, even if the party previously shared the same underlying factual information with federal prosecutors or law enforcement agents,” Lausch wrote in a letter to the top Democratic and Republican members of the committee, adding, “except as noted below.”

Lausch went on to describe a narrow set of circumstances that could prompt an objection from his office if lawmakers seek to find out what information witnesses have told federal investigators or a grand jury.

“For example, if a witness explained certain facts to federal prosecutors or a grand jury, we do not object generally to a witness explaining those same facts to the SIC,” Lausch wrote. “We object, however, to questions about whether the witness shared those (or any other) facts with prosecutors or federal law enforcement agents, as such questions could reveal confidential information about the course of our investigation and could deter cooperation with our investigation by that witness and others.”

In addition, Lausch said he would object to the committee requesting documents directly from his office or from other federal agencies, or any documents related to a proposed federal grant of immunity.

Lausch’s letter, however, appeared to do nothing to break the partisan tension that has separated the Special Investigating Committee’s chairman, Rep. Emanuel “Chris” Welch, D-Hillside, and the panel’s ranking Republican, Rep. Tom Demmer, of Dixon.

Those two had spoken by phone with Lausch on Monday, Sept. 14 to discuss how they could proceed with the legislative investigation without interfering with the ongoing federal criminal probe. But the two walked away from that conversations with vastly different interpretations of what Lausch had said.

In statements since that phone conversation, Welch has said it was his understanding that the committee was free to call witnesses, but could not ask them any questions related to the federal probe.

The Special Investigating Committee was formed after House Republican Leader Jim Durkin, of Western Springs, and two other Republican House members filed a petition Aug. 31 to commence disciplinary proceedings against Madigan, a Chicago Democrat and the longest-serving state legislative speaker in U.S. history.

Madigan was implicated in a bribery scheme when ComEd officials entered a deferred prosecution agreement with Lausch’s office in which they admitted that, from 2011 through 2019, they awarded no-work jobs and lobbying contracts to close associates of Madigan in an effort to win his favor for legislation that benefitted the company.

Madigan so far has not been charged with any crime and has staunchly denied any wrongdoing.

The legislative probe, however, is not focused on whether he committed a crime, but whether he “engaged in conduct which is unbecoming to a legislator or which constitutes a breach of public trust.” If his fellow lawmakers find that he did, disciplinary action could range from a reprimand or censure to expulsion from the House.

Following the release of Lausch’s letter, Demmer and Welch remained deeply at odds over what they believe it meant.

“The U.S. Attorney’s Office has given the Special Investigating Committee the green light to pursue all avenues of the investigation, including testimony and documents, that were articulated in the petition,” Demmer said in a statement. “We are grateful that US Attorney John Lausch told the Committee that his office recognizes the SIC’s ‘separate and independent obligation to conduct its inquiry.’ We look forward to the Committee convening promptly to do this important work.”

But Welch issued a separate statement saying Lausch’s letter confirmed what Democrats had stated before, that any information beyond what has already been made public in the deferred prosecution agreement “is explicitly off limits.”

“Once again, I will not allow this committee to inappropriately interfere with the work of the U.S. attorney, and I will not allow it to be used as a stage for political theater,” Welch said.