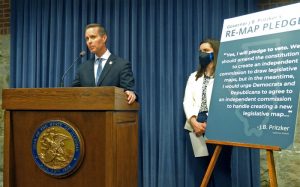 “In the end, I think the public is demanding an open transparent process,” Davis, of Taylorville, said during a Statehouse news conference. “And many of our colleagues, including Gov. Pritzker, have said in their own words, that they would like an open and transparent process, one that’s going to stop politicians from picking their own voters.”

Both the U.S. and Illinois constitutions require that district maps be redrawn every 10 years using the latest census data to ensure equal representation. The Illinois Constitution requires it to be done in the year following the decennial census.

The state constitution also requires that the General Assembly complete its work by June 30. After that, the process is handed over to an eight-member bipartisan commission and, if that body fails to approve new maps by Aug. 10, a ninth member is appointed by random selection to give one party or the other a 5-4 majority.

That’s the process that has been used in four of the last five redistricting efforts. Only in 2011 did the General Assembly complete the process before the June 30 deadline.

But Republicans this year have proposed legislation, Senate Bill 1325, that would authorize the Illinois Supreme Court to appoint a 16-member commission made up of seven Democrats, seven Republicans and two independents.

The plan is similar to a proposed constitutional amendment that voters petitioned to have placed on the November 2016 ballot but which the state Supreme Court rejected on technical grounds.

“In 2016, we had almost 580,000, Illinoisans that signed petitions to put a commission on the ballot yet that was kicked off by Mike Madigan and his legal team and by one judge, a single judge with the Supreme Court, Judge Tom Kilbride, who wrote the majority decision that kicked that off the ballot … or else we would be drawing maps a different way this year, I believe,” said Rep. Tim Butler, R-Springfield.

“While the context may have changed, when he was asked that question, it was assumed that Mike Madigan would be drawing the maps,” she said. “His pledge has not and cannot change.”

In 2019, Sen. Julie Morrison, D-Lake Forest, proposed a constitutional amendment that many believe would have passed Supreme Court scrutiny. That measure had 36 cosponsors, including 17 Democrats, but it was never assigned to a substantive committee and it died at the end of the 2020 session.

Butler pointed to the city of Springfield as an example of how legislative districts have been gerrymandered for partisan gain.

When the current maps were drawn in 2011, he said, the capital city was divided among three House districts and three Senate districts, and initially none of the lawmakers holding those seats actually lived in Springfield.

“Why was that done,” Butler asked. “That was done for partisan political reasons to try to get new Democrat seats in there. That’s what it was.”

Republicans argue that legislative maps have been drawn intentionally to favor Democrats, and they have alleged that Democrats have a disproportionate advantage in the General Assembly because of it.

Democrats, however, have argued that the maps also ensure that racial and ethnic minorities are fairly represented, and they have accused Republicans of trying to break up those voting groups, who traditionally vote Democratic.

“As Republicans nationwide seek to silence Black and Brown communities, Democrats in Illinois remain committed to the creation of a fair map that reflects the great diversity of our state,” Sen. Omar Aquino, D-Chicago, who chairs the Senate Redistricting Committee, said in a statement Monday. “We have invited communities of interest across Illinois to participate in this process, including establishing an online portal that allows anyone to draw and submit their own proposed maps.”

Aquino also argued that the GOP bill would likely be found unconstitutional because, without an amendment, the Constitution currently requires the General Assembly to redraw maps every 10 years.

Rep. Elizabeth Hernandez, D-Cicero, who chairs the House Redistricting Committee, said after a hearing Monday that she does not know whether the idea of an independent commission is dead for this year.

“It’s a continuing conversation,” she said. “I can’t tell you, until really once we’re finalized with all the testimony, what direction this will take.”

She also said she had not spoken to Pritzker or House Speaker Emanuel “Chris” Welch, D-Hillside, about the issue.