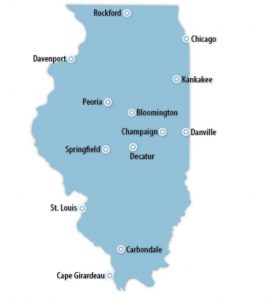 The number of nonfarm jobs increased over-the-year in all 14 Illinois metropolitan areas in April according to preliminary data released today by the U.S. Bureau of Labor Statistics (BLS) and the Illinois Department of Employment Security (IDES).

The unemployment rate decreased over-the-year in all metro areas.

“Decreased unemployment in all 102 counties compared to last spring is a critical component of Illinois’ pandemic recovery, and the administration will continue to deploy every available resource to ensure that this economic rebound is as widespread as possible,” said Deputy Gov. Dan Hynes. “That said, COVID-19 is still with us, and the Department remains focused on supporting workers not yet able to rejoin the labor market through benefits as well as job-matching resources.”