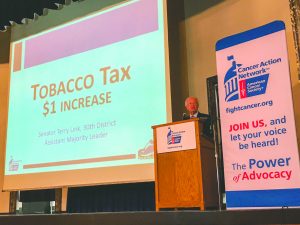 State Sen. Terry Link (D-Vernon Hills) tells a group of lobbying volunteers with the American Cancer Society on May 1 in Springfield that he wants to be one of the tobacco industry’s most hated state lawmakers. Link had a hand in passage of Illinois’ public smoking ban and Tobacco 21 statutes. (Capitol News Illinois file photo by Rebecca Anzel)

SPRINGFIELD — The Illinois Senate is considering a bill that would expand the state’s general ban on smoking in public places to include e-cigarettes and other alternative nicotine products, but the vaping industry is resisting, saying their products do not produce “smoke” and don’t pose the same public health risks.

During a hearing Tuesday in the Senate Public Health Committee, supporters of the bill argued that the public health effects from exposure to second-hand fumes from those devices are still unknown, but that the state has an interest in regulating their use.

“Electronic cigarettes are completely unregulated tobacco products that have been sold in the United States for a little over a decade,” said Kathy Drea, vice president of the American Lung Association of the Upper Midwest. “Because there has been no (Food and Drug Administration) review of the products on the market, we do not know what is in each individual product.”

She said there are a number of different devices on the market that are known collectively as “electronic nicotine delivery systems,” or ENDS. All of them, though, use an electronic heating element that converts a nicotine-containing liquid into a vapor that is inhaled.

The bill being considered is Senate Bill 1864, which passed out of the committee on March 5, but was sent back to the committee recently for a technical amendment to make the language consistent with the state’s new “Tobacco 21” law, which prohibits selling tobacco products to people under age 21.

Sen. Terry Link (D-Vernon Hills), the bill’s chief sponsor, said that because of the lack of regulation, e-cigarettes and other vaping products have become pervasive among underage people in public schools.

“We have an epidemic because these young kids are using these in the school systems,” he said. “I’ve had mayors, I’ve had school principals, I’ve had school superintendents, I’ve had teachers talk to me: Figure out a way to get these out of our schools.”

But Craig Kitson, who lobbies for the Smoke-Free Alternatives Coalition of Illinois, argued that vaping products are one way to help people quit smoking tobacco, and he said he believes the bill goes too far.

“The Smoke-Free Act is about protecting others from the dangers of smoke from combustible tobacco. I think we all can agree that it is very necessary to have the Smoke-Free Act here in Illinois,” he said. “To add vaping products into this legislation ignores the basic fact that vapor products do not contain smoke.”

Kitson said that at the very least, the bill should exempt retail stores that sell vaping products from the ban because that’s where people go to try out the products and devices.

Link, however, said he had tried to negotiate with opponents of the bill to no avail, and with only a few days left in the 2019 session, he didn’t want to delay enacting the new law any longer. He added, however, that he would be willing to work on follow-up legislation to be considered next year.

The committee approved the amendment and sent the bill back to the full Senate.