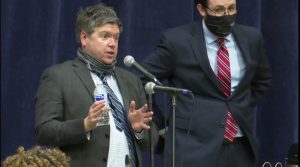 Rep. Mike Zalewski, D-Riverside, is pictured on the House floor at the Bank of Springfield Center on Jan. 13 debating a bill that would have eliminated tax deductions for Illinois business owners, created under the federal CARES Act. That bill was one of several important measures that failed to pass during the 101st General Assembly. (Blueroomstream.com)

SPRINGFIELD — The 101st Illinois General Assembly took historic action by passing legislation to end cash bail prior to electing a Black House Speaker for the first time in the 102nd General Assembly.

But lawmakers ran out of time on several consequential measures — including bills that would have expanded vote-by-mail, allowed lawmakers to conduct business remotely during the pandemic and eliminated newly expanded income tax deductions for business owners. Another bill relating to the state’s rollout of legalization of adult-use marijuana also failed to pass, as did a measure that was part of the Illinois Legislative Black Caucus’ health care agenda.

House Democrats fell 10 votes short of passing a bill, endorsed by Gov. J.B. Pritzker, that would have eliminated certain tax deductions for Illinois business owners that were created under the federal CARES Act. Pritzker has argued this change by the legislature is needed to prevent revenues from shrinking by more than $500 million during the current fiscal year, thus enlarging the state’s $3.9 billion budget deficit.

In a Jan. 8 news release, Pritzker encouraged the General Assembly to “decouple” Illinois’ tax law from the federal tax amendments under the CARES Act, an action that would have kept the state tax code consistent with previous years.

Pritzker claimed those changes would have preserved $500 million in state tax revenue from noncorporate taxpayers and owners of pass-through entities, such as limited liability companies and partnerships.

During House floor debate in the early hours of Jan. 13, lawmakers on both sides of the aisle described the bill as preserving up to $1 billion in state revenue.

Zalewski of Riverside tried to appeal to his caucus, but 10 House Democrats voted present while another eight did not vote on the bill, including former House Speaker Michael Madigan, of Chicago, and the newly elected Speaker Emanuel “Chris” Welch, of Hillside.

At least a dozen Republicans condemned the proposal as a last minute “tax hike” on small business owners already crushed by the pandemic.

During the House floor debate, Rep. Tim Butler, R-Springfield, said the bill amounts to the tax increase that Republican lawmakers anticipated would come up during the lame duck session.

“This is the textbook definition of a late night, no one is watching, lame duck, back door tax increase. This is exactly what people hate,” he said.

Zalewski characterized the proposal as an effort to prevent loss of revenue, rather than an effort to raise new revenue.

House Republicans were also critical that the Pritzker administration and the Illinois Department of Revenue did not notify taxpayers or the legislature sooner of the state’s plans to decouple from the federal changes that were made in March.

During a news conference on Friday, Jan. 15, Pritzker said he expects the legislature will bring the proposal back in the 102nd General Assembly.

“Although it didn’t happen in the short lame duck session, I have a commitment from the leaders that it will be brought up in the regular session,” Pritzker said on Friday in response to a question about the failed decoupling bill. “I’m anticipating that it will get brought up soon in the new session of the General Assembly.”

The remote voting bill, which passed the Senate unanimously, would have permitted the House and Senate to convene remotely and cast votes during a public health emergency where “in-person participation poses a significant risk to the health and safety,” of lawmakers, their staff or the public.

It would have required both chambers to create rules for remote participation in session and committees, and it would have applied to the boards of the Joint Committee on Administrative Rules, Commission on Government Forecasting and Accountability and Legislative Audit Commission.

The Senate changed its rules during the brief May session to allow for remote hearings but the House failed to pass similar changes. Two lawmakers voted remotely in the lame duck session.

Both chambers released tentative calendars last week showing they are scheduled to meet in-person several days each month through May.

Since the pandemic hit Illinois in March 2020, members of the House met briefly the following May and earlier this month at the Bank of Springfield Center, while the Senate continued at the Capitol for those brief sessions.

Multiple people that attended last week’s lame duck session — including the chief of staff to the House speaker’s office – have tested positive for COVID-19. The governor said last week he would not prioritize lawmakers in the next phase of vaccination.

The vote-by-mail bill, which passed the Senate by a vote of 40-18, would have made permanent some changes that were implemented in response to the pandemic for the 2020 general election. This would have included the use of drop-box sites to collect ballots without postage and curbside voting during early voting or on Election Day.

It also would have required the State Board of Elections to provide guidance, rather than rules, for securing collection sites. Neither bill was taken up for a vote by the full House on Wednesday.

Meanwhile, House Bill 122, which would have added another round of 75 marijuana dispensary licenses among other actions, passed the Senate but did not receive a vote in the House as well.

Senate Bill 558, which was a wide-ranging bill consisting of several health care reforms backed by the Black Caucus, passed the House but did not receive a vote in the Senate.