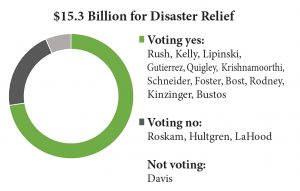 $15.3 Billion for Disaster Relief: Voting 316 for and 90 against, the House on Sept. 8 gave final congressional approval to a bill (HR 601) that would appropriate $15.3 billion in disaster aid for recovery from hurricanes Harvey and Irma while raising the national debt limit through Dec. 8 and funding the government on a stopgap basis for the same period. Because this is emergency spending not offset elsewhere in the budget, it would be added to federal deficits. The bill locked in a deal between President Trump and congressional Democrats that set a far shorter debt-limit extension than the 18 months sought by Republican leaders. All negative votes were cast by Republicans.

The bill would provide $350 million for Small Business Administration loans and grants, $7.45 billion for Federal Emergency Management Agency aid to storm victims and $7 billion-plus to fund community-development block grants for the immediate rebuilding of towns and cities.

Rodney Frelinghuysen, R-N.J., called the bill “the first step to what will be a long and difficult recovery” for residents of Texas, Louisiana, Florida and possibly elsewhere.

Richard Neal, D-Mass., said raising the debt ceiling “is not about future spending. This is about the credit card having come due for in most instances reasonable expenditures, not the least of which is the obligation we have to Social Security, Medicare and our senior citizens.”

A yes vote was to send the bill to President Trump. 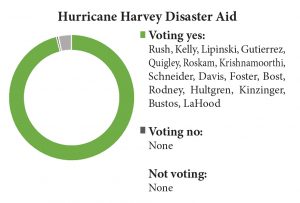 Hurricane Harvey Disaster Aid: Voting 419 for and three against, the House on Sept. 6 passed an earlier version of HR 601 (above) that sought to appropriate $7.85 billion in Hurricane Harvey disaster relief, including $7.45 billion for the Federal Emergency Management Agency and $450 million in Small Business Administration aid for rebuilding areas of Texas and Louisiana devastated by the storm. The entire outlay was to have been deficit spending.

Al Green, D-Texas, said: “This is only a down payment. There must be much more. We need help in Houston post haste as is the case with other places around the country that have been devastated.”

John Culberson, R-Texas, said “help is on the way because today in the Congress, there are no Republicans, there are no Democrats, we are all Americans.”

No member spoke against the bill. The negative votes were cast by Justin Amash of Michigan, Thomas Massie of Kentucky and Andy Biggs of Arizona, all Republicans. 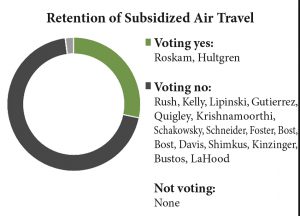 Retention of Subsidized Air Travel: Voting 140 for and 280 against, the House on Sept. 6 refused to kill the Essential Air Service program by removing its $150 million budget from a fiscal 2018 appropriations bill (HR 3354) that remained in debate. Under the EAS program, airlines receive taxpayer subsidies to provide two-to-four round trips daily between about 160 participating communities and hub airports. The program is funded by user fees as well as public funds.

Tom McClintock, R-Calif., said the program “subsidizes empty and near-empty planes to fly from small airports to regional hubs that are usually just a few hours away or less by car. This was supposed to be a temporary program” when enacted in 1978.

Mario Diaz-Balart, R-Fla., said the amendment “would cut off air service to many rural communities and would put economies of many of our small towns potentially at risk.”

A yes vote was to effectively kill the Essential Air Service program. 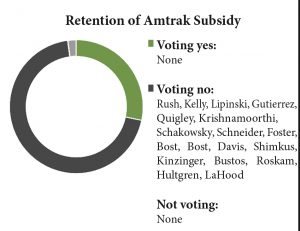 Retention of Amtrak Subsidy: Voting 128 for and 193 against, the House on Sept. 6 refused to strip a pending appropriations bill (HR 3354, above) of its $1.1 billion subsidy for Amtrak, thus killing the nation’s rail passenger agency by shutting down all 15 of its long-distance routes and all 28 of its state-supported routes. Overall, Amtrak reaches more than 500 communities in 46 states.

Mo Brooks, R-Ala., said: “I would submit that there is zero evidence that Amtrak passengers cannot absorb higher fares to pay their own way.”

A yes vote was to defund Amtrak. 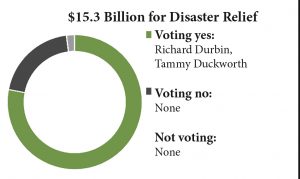 $15.3 Billion for Disaster Relief: Voting 80 for and 17 against, the Senate on Sept. 7 approved a bill (HR 601, above) that would appropriate $15.3 billion in disaster aid for recovery from hurricanes Harvey and Irma while raising the national debt limit through Dec. 8 and funding the government on a stopgap basis for the same period. The spending would be added to annual deficits rather than offset elsewhere in the budget.

Majority Leader Mitch McConnell, R-Ky., said the bill provides ‘certainty and stability’ in preparing for and recovering from these storms with critically needed emergency resources that will not be interrupted by the prospect of a shutdown or default.?

John McCain, R-Ariz., said: “Attaching emergency funding for hurricane relief to a must-pass continuing resolution and debt limit increase is irresponsible and a dereliction of our most routine duties.”

A yes vote was to send the bill back to the House. 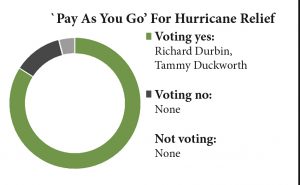 `Pay As You Go’ For Hurricane Relief: Voting 87 for and 10 against, the Senate on Sept. 7 tabled an amendment to HR 601 (above) that sought to keep the bill’s $15.3 billion expenditure deficit-neutral by cutting the same amount from foreign assistance accounts.

Rand Paul, R-Ky., said: “For those who are flooded in Texas, let’s help them, but let’s help them by not sending the money to Pakistan and to other countries that do not even like us.”

No senator spoke against the amendment.

A yes vote opposed ‘pay as you go’ for the bill.