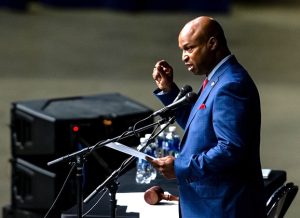 Speaker Emanuel “Chris” Welch is pictured on the floor of the Bank of Springfield Center on Jan. 13. (Photo by Justin Fowler, Springfield State Journal-Register)

SPRINGFIELD — On Jan. 28, Illinois House Speaker Emanuel “Chris” Welch announced the committees and their respective chairs for the 102nd General Assembly, including the addition of six new committees.

The committee announcement comes as Welch canceled all but one of the House session days that had been set for next month.

Lawmakers in the House are expected to return on Wednesday, Feb. 10 “for a one-day session to adopt House Rules for the 102nd General Assembly that will authorize remote work and legislating for committees,” according to Welch’s news release.

Although the state Senate passed rules that allow for remote committee work, the House did not.

According to the release, House members are scheduled to meet in the state Capitol, rather than the Bank of Springfield Convention Center, where they met in January for the lame duck session. They also convened at the convention center for session last May.

Members will rotate between the House chamber and their offices in order to maintain social distancing, the release states, and the Bank of Springfield center “will be available as a backup option if chamber use is ultimately determined not yet feasible.”

“Illinois is facing a number of major challenges at once,” said Welch said in a news release. “From ensuring a robust economic recovery to undoing systemic racism, delivering on gender equity and women’s issues, and getting our fiscal house in order; we need committee leadership who know how to facilitate collaboration, bring forward bold ideas, get bills through committee, onto the House floor, and to the Governor’s desk for signature. I am confident this group of committee chairpersons will deliver for Illinois residents.”

Rep. Kelly Cassidy, D-Chicago, will chair the Restorative Justice Committee, which is being reinstated after a two-year hiatus.

“It’s a great opportunity to allow for deeper dives into the issues driving mass incarceration and a chance to focus on policies that will actually lead to greater safety in our communities that our historic dependence on retribution-based criminal justice responses has left out of the discussion,” Cassidy said.

Guzzardi, who will chair the Housing committee, said the crisis of affordable housing in his district has been exacerbated by the coronavirus.

“Now, housing and public health are sort of intimately intertwined,” he said. “I believe that housing should be fundamental human right guaranteed to everybody and that should be part of government’s job… I think that we have an opportunity to really take on some ambitious legislation in making sure that people can find homes, stay in their homes and thrive in their homes.”

Rep. Ann Williams, D-Chicago, who competed against Welch for the speakership, will continue to chair the Energy and Environment committee. She said she hopes to advance a comprehensive clean energy package this session.

“It’s clear Speaker Welch understands the importance of this issue and I am excited to work with him, other colleagues, and stakeholders to make it happen,” she said. A full list of committees and chairs can be found here.

In a letter to the caucus, Welch wrote the next step is to solicit feedback from members on which committees they wish to be assigned. Members in their second terms will receive strong consideration on requests to serve as a committee vice-chair, according to the letter.