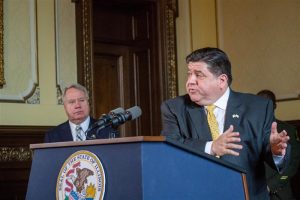 Gov. J.B. Pritzker takes questions on the state’s Prisoner Review Board Tuesday, March 29 at his Capitol office. Four members have exited the board in recent weeks amid political pushback against the governor’s nominees. (Capitol News Illinois photo by Jerry Nowicki)

SPRINGFIELD – Chicago attorney Alan Mills has a client on the Prisoner Review Board’s clemency docket in April. His hearing has been indefinitely postponed because there is no longer a quorum on the PRB.

The client is a contractor who recently remodeled Mills’ law office, the Uptown People’s Law Center, and has a conviction for an old assault. Mills said the client, who he did not identify, didn’t go to prison, but the conviction on his record may impact his ability to get work.

On Monday, March 28, Oreal James resigned by way of a letter to Gov. J.B. Pritzker before going to the Senate for a vote, and Eleanor Kaye Wilson failed to get the required votes needed to confirm her appointment.

Under the law, gubernatorial appointments must be approved within 60 session days of their nomination. Wilson and James came under scrutiny when their appointments were pulled and then resubmitted by Pritzker to restart the 60-session-day clock in which their appointments could be heard by the committee. This practice is allowed under Senate rules and has been used by previous governors.

With James’ resignation and Wilson’s failed confirmation, the PRB now has just six seated members of a 15-member board. Of those, LeAnn Miller, Jared Bohland and Ken Tupy need Senate approval. Tupy and Bohland were recommended by the Executive Appointments Committee unanimously. Miller was also recommended.

On Tuesday, March 29, the PRB website noted the next quarterly clemency hearings, which were scheduled for April 12 to April 15, have been indefinitely postponed due to “unforeseen circumstances” as the agency looks to “finalize a future date and location.”

“As we predicted, recent attacks on the Prisoner Review Board left the body short-staffed and without the capacity to carry out April’s quarterly clemency hearings,” said Jennifer Soble, executive director of the Illinois Prison Project in a news release on Tuesday, March 29. “This is the result of failed tough-on-crime rhetoric meant merely to incite fear and score cheap political points.

“The human toll is real: Justice will be delayed for our clients and for many other people in prison awaiting the chance to be reunited with loved ones. While we’re disappointed, we will not be deterred. We will continue to zealously advocate for the freedom of our clients.”

Last week, Jeff Mears, a downstate Democrat, won a recommendation from the Senate Executive Appointments Committee, but also failed to get confirmed by the full Senate. Two weeks ago, Pritzker pulled the appointment of Max Cerda, a PRB board member who was convicted of a double murder when he was 16 years old and paroled in 1998. It appeared Cerda would not have enough Senate support for approval.

“The Prisoner Review Board is committed to fulfilling its statutory obligations, including final revocation hearings. This work will be carried out with the same dedication and professionalism as before and the Board will adhere to all policies and procedures currently in place,” said Kahala Clay, the Chief Legal Counsel for the PRB.

The PRB has been a source of scrutiny from Senate Republicans who questioned the appointment process and the recent decisions on release, including the release of two men, both now in their 70s, who shot an Illinois State Police trooper in 1976.

Pritzker spoke out during a news conference to honor the Illinois State Police on Tuesday.

Pritzker said the PRB members are charged with examining the original crime, whether the offender is rehabilitated, whether they caused problems while incarcerated and whether they would be a danger to the public.

Pritzker did not directly respond to a question Tuesday, as to how long it would take to get the board to a quorum, but he did note that the recent publicity around the board makes finding replacements more difficult.

The governor could appoint new members before the Senate adjourns, but the Senate would have to act on those appointments before recess on April 8, probably too late to save the April clemency docket. The constitution provides that a governor can make a temporary appointment to a board during a recess of the Senate.

Mills, who represents offenders in the Illinois Department of Corrections, contends that the GOP is trying to generate public outrage to cast Pritzker and Democrats as “soft on crime.” He said the members of the PRB were diverse and well-qualified.

“I’m sorry the politicians have turned this into a campaign issue,” Mills said.

Mills said he plans to represent his contractor when the PRB is back up and running because the man deserves a fresh start and a chance to build his business.

“He does good work,” Mills said.

What’s next for the parole board? Five Pritzker appointees await confirmation