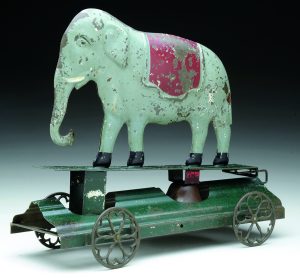 This bell toy elephant has the tip of his trunk up, signaling the good luck he rings. The 19th-century toy was offered for sale several years ago at a James Julia auction. (Kovels)

Bell toys, a type of pull toy that had moving parts that rang a bell, were made in America just after the Civil War. The Gong Bell Co. of Connecticut made the first one. It was an iron four-wheel platform, holding a bell and an animal. The animal kicked or hit the bell when the platform moved. A popular bell toy featured an elephant that stepped on the bell to make it ring. The 9-1/2-inch-long toy is made of decorated metal. It was estimated to be worth $800 to $1,200.

Later bell toys used wood, tin or other metals and added realistic hair or animal hide. The toys were all painted. The 1880s and 1890s were the golden age for bell toys, and in the 1900s copies were made of metal and eventually plastic. Today, bell toys are wood or plastic made by Fisher Price or Playskool.

Q: I have dishes with bowls that look like heads of lettuce and plates that are a single lettuce leaf. They are marked with the signature “Dodie Thayer.” Can you tell me anything about them?

A: Large leaves probably were one of the first “plates” used at a feast. So it’s not surprising that plates were shaped like cabbage or lettuce leaves by the 1600s. Leaf-shaped European majolica plates were made by Delft, and by the 18th century they also were crafted by English potteries Wedgwood, Longton Hall, Chelsea and Minton, and French potteries Jacob Petit and Palissy. There was Etruscan Majolica from Pennsylvania, and modern giftware items like California Dodie Thayer ceramics.

This Palm Beach dishware was made during the 1960s and ’70s. Dishes were made from molds of actual cabbage or lettuce leaves, or full heads of the vegetable. Pink, red, yellow and green sets were made. They are signed with the artist’s name. Recently, the Lettuce Ware dishes were reproduced for the Tory Burch shops in green or white. Full sets are made with cups, plates, tureens and more. A new salad plate costs $40. Leaf-shaped dishes of all ages are popular with collectors, but only those made of porcelain or after 1900 should be used to serve food.

TIP: Do not use an old crib or place old painted furniture and toys near very young children; check the paint. The use of lead paint was discontinued in the U.S. in 1978.