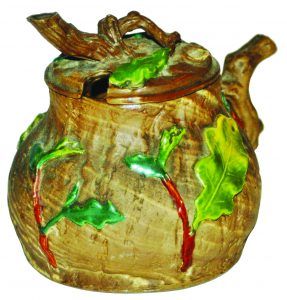 Mettlach, Germany, is a town known for manufacturing beer steins at the Villeroy and Boch factories since about 1842. They made all types of pottery.

It started in 1809 when Pierre-Joseph Boch established a company in the remains of a cathedral built in 786 A.D. To avoid destroying the trees used for the factory’s fuel, a coal-burning kiln was developed by 1816. Famous artists were hired to create the designs. There were eight V&B factories making ceramics.

In 1836, Mettlach merged with Villeroy & Boch, forming a company run by Eugene, son of Pierre-Joseph. Modern improvements continued. They adopted new styles, new products like tableware, and new types of ceramics. After a fire destroyed the factory and records in 1925, they reproduced many old items.

Collectors since the 1970s pay the highest prices for the pre-fire pieces. “Earlyware Relief” pieces were made before 1880. They were formed in a mold, often to look like a tree trunk and sometimes tan colored. Molded pieces resembling vines were added and colored green or brown with platinum accents. Mettlach marks tell the story of a piece, with as many as nine marks on a piece.

Q: About five years ago, I bought a Madame Alexander doll at a sale. It came in the original box, which reads “Josephine” and “1335.” She’s 12 inches tall and is wearing a long chiffon gown trimmed with embroidered ribbon and lace, a gold crown and jewelry. Everything is in perfect condition. Is the doll worth anything, or should I let my great-grandchildren play with her?

A: Beatrice Alexander Behrman and her sisters founded the Alexander Doll Company in New York City in 1923. The name “Madame Alexander” was trademarked in 1928, and Beatrice started using the name for herself as well as for her dolls. The company was sold in 1988 when Beatrice retired. It has been owned by Kahn Lucas since 2012. Josephine is part of Madame Alexander’s Portraits of History series of dolls made from 1980 to 1986. She represents Empress Josephine, Napoleon’s first wife. Dolls like yours are plentiful and sell for under $30.

TIP: Never try to polish or clean bronze-colored bookends. They have a bronze coating and collectors like the patina. Cleaning lowers the value.

Stay connected! Join tens of thousands of other collectors who receive our FREE weekly email with insider tips, news, marks and more at www.kovels.com.