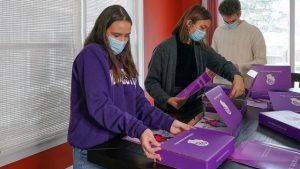 Victoria Da Conceica (left) works with others to get Alzheimer’s Brain Boxes ready for shipment across the United States. (Northwestern U. News photo by Teresa Crawford)

Victoria Da Conceicao, a second-year student at Northwestern University, learned at a young age what it means to fight back against adversity.

As a child, she always lived near her grandmother outside of Oakland, Calif., until her family moved to follow work outside the Bay Area.

At the age of 16, feeling homesick, she decided to return on her own and move into her grandmother’s home to attend high school nearby.

But one day when they were supposed to meet after school, Da Conceicao’s grandmother never came to pick her up. Her uncle found her later that day wandering in a park close to the school.

At that point forward, their lives changed forever.

By the time her grandmother was eventually diagnosed with Alzheimer’s disease, she was no longer able to drive or leave the house on her own. Having worked hard at many jobs since immigrating from Mexico when she was 19 years old, she was an inspiration to her granddaughter. But now she’d lost her sense of purpose and the spirit of independence she was known for.

Da Conceicao began to research therapies for the disease. She learned that puzzles, essential oils and custom coloring books could help enhance mood, engage the brain and improve memory.

“I still remember the evening I came up with the idea for coloring books for Alzheimer’s patients. My grandmother and I were eating dinner, and she was telling me all these old stories. I saw her face light up in a way I had not seen in months. She got up from the table and came back with photos of her time in Mexico, her family and her favorite places there.”

She now had the makings of her own small business, which she founded in 2018 while she was still in high school. Through Alzheimer’s Brain Box, she assembles, packs and ships care packages throughout the U.S.

“I knew I had to be brave for her, so I never let her see how scared I was,” Da Conceicao said. “Once I decided to create the company, I had an outlet for my concerns. I poured my heart into my work and over time, my fears lessened, and I found solace in refining my products.” 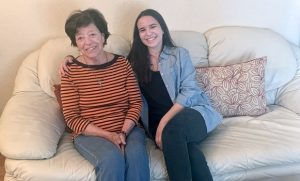 Northwestern University student Victoria Da Conceicao with her grandmother at home in California. (Photo courtesy of Northwestern U. News)

Now a second-year student in the Weinberg College of Arts and Sciences, she’s upping her game this quarter by taking the class “Entrepreneurial Endurance, Leadership & Mindset” through the Farley Center for Entrepreneurship and Innovation in the McCormick School of Engineering.

“I’m so fortunate to be at Northwestern, in this collaborative environment where people work across schools and disciplines to actually help each other,” she said. “In fact, I’ve found several partners among my fellow students who’ve brought diverse skills to help make the company go.”

Among her Northwestern collaborators is first-year student Jenna Ginsburg of the School of Communication, who also has a family member affected by Alzheimer’s. She has been handling social media and administrative duties for the company this year.

As CEO and founder of Alzheimer’s Brain Box, Da Conceicao has been a corporate sponsor of the Alzheimer’s Association Walnut Creek Chapter to help raise research funds, and she has partnered with AARP to raise awareness about the ways minorities and women are disproportionately affected by the disease.

As the pandemic evolves to a new phase this summer, Da Conceicao plans to return to California to work with memory care facilities, hospice groups and medical centers. One such partnership is already underway with Yolo Hospice in Davis, northeast of the Bay Area.

There she has added a twist to the original package, incorporating writing prompts based on information patients’ loved ones provide in order to facilitate some of that same storytelling that brings her own grandmother so much joy and comfort.

Her grandmother always says, “El querer es poder,” which means “to want is to be able.”

“This has stuck with me over the years,” Da Conceicao said. “My dream is to continue working for Alzheimer’s Brain Box after I graduate, but to be able to support even more senior care facilities before that. My grandmother’s support provides the strength I need to pursue this dream. And I know that, no matter what happens, I’ll always be able to go home to her.”