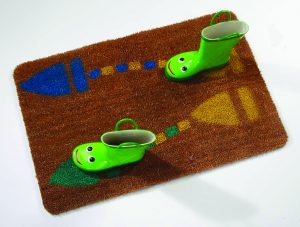 Dance cares (and muddy shoes) away with a cha-cha-cha doormat. (Photo by Donna Erickson)

Dance away mud, grit and grime from your shoes and boots with a whimsical doormat. Your family can paint it together and then use it every time you walk through the door during this wet and muddy season.

Why is it so much fun? The design is actually a set of four painted footprints arranged in such a way that your kids can follow them to do basic “cha-cha-cha” dance steps. Once they get the hang of the moves, you won’t have to nag them the next time they walk through the door. Instead of asking “Did you wipe your feet?” for the umpteenth time, simply ask, “Did you do the cha-cha-cha?”

Here’s the stuff you’ll need to make your own cha-cha-cha doormat in 3 easy steps:

— A sheet of newspaper

Teach your kids the basic “cha-cha-cha” steps, and practice using the “footprints” as a guide. This might be a good time to ask a grandparent, aunt or uncle to step in and share their dancing skills with the kids. Who knows? Your child may be just baby steps away from “Dancing with the Stars” — and your floors will stay relatively clean to boot!

Extra tip: If your kids have plain, solid color rubber rain boots, personalize and brighten them with a few dabs of paint. Apply acrylic paint in squeeze bottles directly on the outside of clean, dry boots to make designs and patterns.