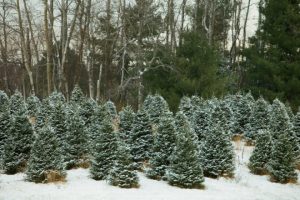 Most trees, 98 percent, that are cut for Christmas are grown on tree farms. (Photo courtesy of Illinois Farm Bureau)

Cut fresh or bought in a store, Americans love their Christmas trees. It is one of our strongest and most lasting holiday traditions.

Here are some facts about the business side of those green or not so green trees: