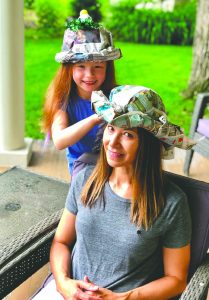 Ava McLean, 7, rolls up two sheets of the daily newspaper into a whimsical hat for her mom.

You can do more with a newspaper than just read and recycle it. Use it to make a hat — and wear it at your child’s birthday party, a picnic at the park or just for fun! All you need are recycled newspapers, a roll of masking tape, or a large rubber band and basic art supplies or picks from your garden, if you want to decorate it.

Open a large newspaper sheet and place it on your head. Set a second same size sheet over the first, going in the opposite direction. Place your hand on the top of your paper-covered head while another person wraps masking tape in a circle on the newspaper, starting at your forehead and creating a band of tape around your head. Wrap tape around twice. If using a large rubber band instead of tape, another person places it on the newspaper covering your head just above your ears.

Roll up all edges of newspaper tightly toward you to create a brim, or ask your helper to do it for you. Finished!

Now it’s time to decorate. Pick a theme such as one of the following:

GARDENING HAT: Glue pieces of seed packets above the brim to create an eye-catching band. In between the packets, glue miniature toy fruits and vegetables, and a rubber worm.

TEA PARTY HAT: Glue silk flowers or tie fresh flowers and leaves around the hat. Attach streamers of ribbons to the back. You might want to add two lengths of ribbon attached to the sides to tie under your chin.

WACKY HAT: Paint designs in bright colors. Let dry. Wrap several pipe cleaners around your finger to form spirals. Poke through the paper and twist and tape securely on underside. Place the spirals randomly around the hat so they spring out. Attach charms, flowers or beads to the ends.

FLAG HAT: Decorate your hat to represent the flag of your state, or country of origin. For an all-American red, white and blue hat, paint the bowl of the hat blue, the brim red and white stripes. Let dry. Squeeze household glue in star shapes over the blue portion and sprinkle with silver glitter.

Show it off! Whatever your gathering, wear your “finery” in an impromptu parade or photo op.