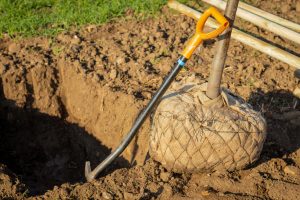 Fall is a great time to plant trees, many of which come from the nursery balled and burlapped. How the tree is planted, either with or without the burlap and wire around the roots, affects the long-term health of the tree. (Courtesy of arborday.org)

Fall is a great time to plant trees, many of which are originally grown at a nursery either in a plastic container or in the ground before they are balled and burlapped. How the tree is grown in its first years and then planted affects the long-term health of the tree.

Balled-and-burlapped trees are grown in-ground at the nursery. When it is time to sell the tree, a large machine called a tree spade digs up an intact root ball. However, many of the smaller roots are lost when the tree spade pulls up the root ball. Up to 90 percent of the entire root system may be lost as the tree is removed from the ground.

The root ball is then wrapped in burlap and set in a wire cage that is tied tightly to keep the root ball intact while it is moved to the planting site.

“Once at the planting site, the debate about the next steps begins,” says Enroth. “Either the tree can be planted with the wire cage and burlap still in place, or the wire cage can be removed  and the burlap cut or rolled down, exposing at least the top third of the root ball.”

Those arguing for leaving on the burlap and wire cage say it helps with establishment by guaranteeing the root ball is not disturbed and protecting any remaining roots. It also maintains the soil structure around the root system. If the burlap used is natural, the fibers will decompose and the tree will grow around the wire cage. Removing the materials takes installation crews longer, which leads to greater expense. 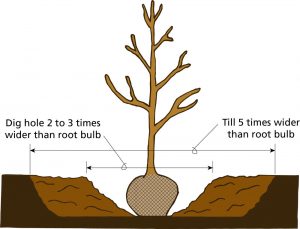 “On the flip side, some contend that leaving the burlap and wire cage on negatively affects the long-term health of the tree,” Enroth says.

Leaving the burlap on hinders root development into the native soil. Burying the burlap slows its decomposition making it a barrier for much longer than expected.

If the tree is an unstoppable force, then the wire cage is like an immovable object the tree cannot grow around. Eventually, the tree will conflict with the cage and may grow around it, but could possibly become girdled.

Enroth says in the scientific studies comparing the two methods for planting balled and burlapped trees, researchers found little difference in the overall growth and health of the trees in both situations. However, time is a major factor.

“If all goes as planned, a newly planted tree is expected to out-live the gardener, says Enroth. “But scientists need to publish their data while still alive so very few long-term studies exist.”

Examining the arguments for and against removing the material from a  balled-and-burlapped tree, Enroth says it seems to be a trade-off between successful establishment and long-term health.

This entire debate is secondary to other tree planting and care items, such as watering and pruning for future tree structure. Without basic tree care, it won’t matter whether the burlap was left on or not.