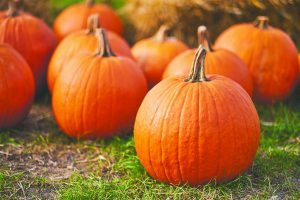 A large pile of bright orange pumpkins is my visual celebration of the beginning of fall. References to pumpkins date back many centuries. The name pumpkin originated from the Greek word for “large melon,” which is “pepon.” “Pepon” was nasalized by the French into “pompon.” The English changed “pompon” to “Pumpion.” American colonists changed “pumpion” into “pumpkin.” The origin of pumpkin pie occurred when the colonists sliced off the pumpkin top, removed the seeds, and filled the insides with milk, spices and honey. The pumpkin was then baked in hot ashes.

The bright orange color of pumpkin is a dead giveaway that pumpkin is loaded with an important antioxidant: beta-carotene. Beta-carotene is one of the plant carotenoids converted to vitamin A in the body. In the conversion to vitamin A, beta carotene performs many important functions in overall health.

Current research indicates that a diet rich in foods containing beta-carotene may reduce the risk of developing certain types of cancer and helps protect against heart disease. Beta-carotene provides protection against other diseases as well as some degenerative aspects of aging.

To select a pumpkin, look for one with 1 to 2 inches of stem left. If the stem is cut down too low the pumpkin will decay quickly or may be decaying at the time of purchase. Avoid pumpkins with blemishes and soft spots. It should be heavy, although shape is unimportant. A lopsided pumpkin is not necessarily a bad pumpkin. Figure 1 pound of raw, untrimmed pumpkin for each cup finished pumpkin puree.

To prepare the pumpkin for cooking, spread newspaper over your work surface. Start by carefully removing the stem with a sharp knife. If you are planning to roast the pumpkin seeds, smash or drop the pumpkin on a hard surface to break it open. In any case, remove the stem, scoop out the seeds and scrape away all of the stringy mass. A messy job, but it will pay off.

You can cook the pumpkin by boiling, steaming, roasting or using the microwave to create your own fresh pumpkin puree. Directions for cooking and preparing pumpkin puree are as follows:

Boiling/Steaming Method: Cut the pumpkin into rather large chunks. Rinse in cold water. Place pieces in a large pot with about a cup of water. The water does not need to cover the pumpkin pieces. Cover the pot and boil for 20 to 30 minutes or until tender, or steam for 10 to 12 minutes. Check for doneness by poking with a fork. Drain the cooked pumpkin in a colander. Reserve the liquid to use as a base for soup.

Oven Method: Cut pumpkin in half, scraping away stringy mass and seeds. Rinse under cold water. Place pumpkin, cut side down, on a large cookie sheet. Bake at 350 F for one hour or until fork tender.

Microwave Method: Cut pumpkin in half, place cut side down on a microwave-safe plate or tray. Microwave on high for 15 minutes, check for doneness at 1-2 minute intervals until fork tender.

Preparing the Puree: Allow cooked pumpkin to cool. Remove the peel using a small sharp knife and your fingers. Place pumpkin in a food processor and puree, or alternately use a food mill, ricer, strainer or potato masher. Freeze and store in 1-cup portions in a small freezer bag for up to one year.

This delicious latte is the perfect way to use pumpkin puree and create a delicious drink for the winter months.

3 teaspoons of cinnamon, plus more for sprinkling