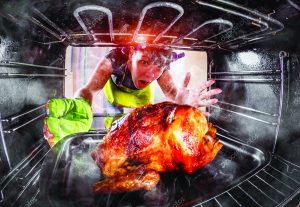 If the turkey begins to burn while it’s roasting, flip the bird over immediately and continue to cook it.

After 45 years of cooking, I’ve had my share of Thanksgiving Day disasters! I’ll never forget the Thanksgiving when the turkey wasn’t done, and my family and friends were starving.

Thankfully, no pun intended, I had defrosted a package of pork chops for dinner the next day. That year we had fried pork chops, cornbread dressing with cranberry sauce, roasted vegetables, mac and cheese, dinner rolls and a vast array of desserts.

One of the many things that I learned that year, and during this stressful and unusual year, is to be thankful for the good things in life, while preparing as much as you can for the unexpected.

Here are some secrets to saving your sanity and your Thanksgiving dinner if your turkey isn’t done, or other unexpected challenges arise:

HOW TO DEFROST A TURKEY: You’ll need at least 24 to 48 hours (about five hours per pound) to thaw a frozen turkey in the refrigerator. If you need to do a quick thaw, place the wrapped, frozen turkey in your kitchen sink or a large container like an ice chest.

Cover the turkey with cold water. Drain and refill the water every half-hour because as the bird thaws out, the water will get warmer. Using this method, the turkey will thaw at the rate of about a half-hour for each pound.

You can place the giblets in the same pan as the raw turkey to add flavor to the meat drippings.

Most turkeys come with the legs already trussed (crossed and secured with a metal or plastic bracket). If you’re not going to stuff your bird, there’s no need to truss the legs, so remove the plastic or metal bracket and discard it.

Trussing an unstuffed bird hinders the hot oven air from circulating inside and around the legs. This means that the dark meat will take longer to cook, and the breast meat will cook faster and dry out before the legs ever get completely done.

THE TURKEY ISN’T DONE: Don’t rely on the “pop-up” timer in the turkey, as it usually means that the breast is overcooked, and the dark meat isn’t done. If the dark meat isn’t done, remove the wings and breast meat from the rest of the turkey, in one piece, if possible. Cover the breast and wing portion with foil and set it aside. Put the drumsticks and thigh portion of the turkey back into the oven to continue cooking until done.

You can re-assemble the whole turkey and garnish it, or just cut it into serving portions and arrange it on a platter.

STUFFING SAVERS: If the stuffing/dressing is too wet, spread it out in a thin layer on a sheet pan so that it will dry quickly. Place it back into the oven for 5 to 7 minutes.

If it’s too dry, add more pan drippings or chicken broth to the mixture. If you don’t have any more drippings or broth, you can combine a chicken bouillon cube (if you have one), along with a teaspoon of poultry seasoning, three tablespoons of butter and 1 cup of water. Cook the mixture in the microwave for 3 to 5 minutes or until it comes to a boil. Stir to combine and then add it, a little at a time, to the dressing until it’s moist.

SOUPY MASHED POTATOES: You can add unseasoned dry breadcrumbs to soupy mashed potatoes to absorb any excess liquid. You can also microwave raw potatoes until soft, spoon out the potato, mash it and add it to your mashed potatoes along with some additional butter, salt and butter.

GRAVY RESCUE TIPS: If the gravy is lumpy, pour it through a strainer into a new pan and bring it to a simmer, stirring gently. If it’s too thin, in a separate bowl, mix a tablespoon of melted butter with a tablespoon of flour. Bring the gravy up to a boil and whisk in the butter mixture to thicken your gravy.

If the gravy is too thick, add a little more chicken broth, pan drippings, milk or a little water and butter to thin it out.

BURNT OFFERINGS: If the turkey begins to burn while it’s roasting, flip the bird over immediately and continue to cook it. After the turkey is done, you can remove and discard any blackened skin and about half an inch of the meat below any burnt area. Slice the remaining breast meat, arrange it on a platter and ladle gravy over it.

If your vegetables or gravy burn on the bottom, carefully remove the layer that isn’t burned into another pot or serving dish. Don’t scrape the bottom of the pan!

If the dinner rolls are burned on the bottom, just cut off as much as you can, butter them, and fold them in half to cover the missing ends.

Whipped cream is the perfect “make-up” for desserts that aren’t quite up to par. You can cut the top layer off a burnt pie and cover it with whipped cream.

Hopefully, these tips will rescue you from any Thanksgiving Day disasters, but remember, it’s about gathering to give thanks with the people you love — not the perfect meal! Have a blessed Thanksgiving!

Angela Shelf Medearis is an award-winning children’s author, culinary historian and the author of seven cookbooks. Her latest cookbook is “The Kitchen Diva’s Diabetic Cookbook.” Her website is www.divapro.com. Recipes may not be reprinted without permission from Angela Shelf Medearis.

The feast doesn’t end with Thanksgiving