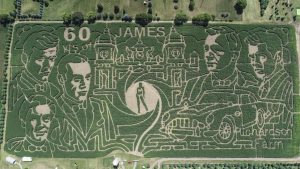 British Secret Service Agent James Bond has been depicted in more than 20 films since 1962.

And the owners of Richardson Adventure Farm in northern Illinois believe 60 years is something to celebrate.

To show their appreciation for the franchise and the milestone anniversary, their 28-acre corn maze in Spring Grove honors the Bond films and actors.

Walk — or get lost — among the biggest names to play 007, including Sean Connery, Roger Moore, Timothy Dalton, Pierce Brosnan and Daniel Craig, as you trek along the 10 miles of trails that outline their faces. The casino in Monaco and an Aston Martin also are part of the maze, which changes every year.

“We all love James Bond. We just thought it was fun,” said George Richardson, who owns the farm with son, Ryan, and brother, Robert.

Richardson boasts it’s the “world’s largest and most intricately designed corn maze.” While he knows a few other mazes are bigger in acreage, their designs are “more spread out.”

“We have to make it big, exciting and spectacular, and that’s what we work on with pretty much everything that we do,” he said.

Although the Richardsons have offered corn mazes since 2001, the James Bond theme picked up a great deal of media attention.

“It’s been phenomenal so far this year; just so fun,” he said. “I think it’s because the movies are so fun.”

The design concept started as some scribbles, which were sent to a maze designer. Using a planter with GPS, the corn was dropped in the ground according to the design. The Richardsons rototilled the paths and added the checkpoints and other signage.

Visitors can opt for easy mazes that take about 10 minutes or try to “solve” the big maze by hitting all 24 checkpoints. But don’t fear, maze-goers can always find a way out. 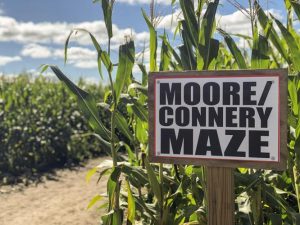 From easy, 10-minute trails to more challenging mazes, the Richardson Farm corn maze is suitable for all ages. Dubbed the “world’s largest and most intricately designed corn maze,” visitors can use a map to help navigate and have fun along the way with games and 24 checkpoints. (Photo by Tammie Sloup of FarmWeek)

“Ever since I got lost at night in our first corn maze, there’s no dead ends,” Richardson said. “This is not a rat maze where there’s one way in and one way out.”

To help with navigation, several wooden bridges were constructed within the maze, and a 60-foot tower sits along the edge. Maps also are provided.

The corn grown for the maze is the “worst possible corn,” consisting of just a cob and husks. Richardson said the lightweight corn prevents injuries in case a rambunctious guest decides to pick and throw a cob while in the maze.

As a group of children ran out of the maze on a recent day, shouting, “Yay! We made it!” Richardson smiled and said that’s why his family is in the agri-venture business — the joy the farm brings to visitors.

George and Robert Richardson previously grew corn and soybeans and finished 2,500 hogs, but experimenting with a Christmas tree business led them down the path to creating the adventure farm, which also offers a zipline, slides, pumpkin-picking, hayrides and more.

The family members all have their areas of expertise, said Robert Richardson, who oversees 100,000 Christmas trees.

Between the Christmas trees, fall activities and a spring tulip festival that could have a million tulips next year, the farm attracts 100,000 visitors annually.

The Richardson farmstead dates to 1836 and was a dairy farm when George and Robert were growing up. The brothers graduated from the University of Illinois and returned to the farm in the late ‘70s, when they started the hog operation. 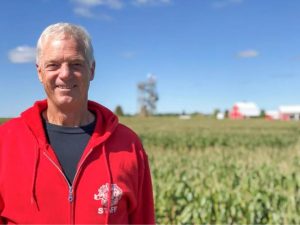 Selling Christmas trees was initially a side hobby, but after selling their first 186 trees and seeing their customers’ reaction, the brothers expanded the operation.

“(Customers) loved to get onto the farm; it felt so good for them,” George said. “And we had a great time doing it.”

“Who would have known in 1836 that this would become an entertainment farm?”

Parent Michelle Helmich of Johnsburg visited the farm with other homeschooled families recently and told FarmWeek she remembers as a kid cutting down her family’s Christmas tree at Richardson Farm.

Asked if she solved the James Bond maze, she laughed.

“Myself, I cannot read a map. I had no idea if we were in a chin or the forehead,” she said.