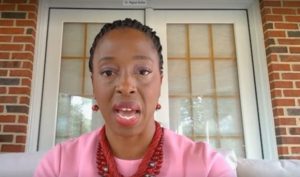 Those passing out candy should maintain six feet from trick-or-treaters and wear proper face coverings, according to the guidance, and trick-or-treating should be done in groups with household members only.

Dr. Ngozi Ezike, director of the Illinois Department of Public Health, said households should consider leaving individually wrapped candy on a table in driveways or in front of walkways to allow for social distancing

Indoor haunted houses are not allowed, per Phase 4 state guidance, and IDPH suggested open-air alternatives such as one-way haunted forests or haunted walks where social distancing can be maintained.

At pumpkin patches, face coverings should be worn and hands sanitized before handling pumpkins. On hayrides, parties should be spaced six feet apart and they should not exceed 50 percent capacity.

Also per Phase 4 guidelines, gatherings of more than 50 people or 50 percent or more of a building’s maximum occupancy are prohibited, including for Halloween parties.

Pritzker and public health officials touched on added mitigations for Region 1 in northwest Illinois, the possibility of exempting counties from regional restrictions and the effect of the University of Illinois’ massive testing output on its region’s positivity rate.

Region 1, from the Rockford area to the state’s northwestern border, will see new restrictions including closure of bars and restaurants to indoor service starting Saturday as the positivity rate there exceeds 8 percent. It must decrease to 6.5 percent for three consecutive days to see mitigations lifted.

Region 4, which includes the Metro East area along the Missouri border, has had increased mitigations since mid-August, and bars and restaurants have been closed to indoor service since the beginning of September. While that region was on a downward trend, the latest data released by IDPH showed the positivity rate increased to 7.4 percent. That’s a half point above where it was four days ago.

That region also will not have mitigations lifted until it sees three days below 6.5 percent.

Pritzker was asked about the possibility of removing St. Clair County, which had a 6.3 percent positivity rate, from added restrictions. He said the 11 regions in the plan were increased from four in a previous version based on the state’s IDPH medical regions.

“People travel in that region. They travel between counties. It is not a good idea, in my view, for us to break this down into 102 counties across the state of Illinois, but instead if we can work with the counties and particularly their county public health officials to bring down their positivity rates, that is the right solution,” he said, noting IDPH is working with other county departments of public health to decrease rates.

While Pritzker said nine of 11 regions were seeing decreasing rates, Ezike pointed out that the lowest region – Region 6 including the Champaign-Urbana area in east-central Illinois – had a rate lowered by the U of I’s massive testing program, which on some days accounts for 20 percent of the state’s testing output.

Region 6 has a 2.2 percent positivity rate, but with the UI tests removed, it’s actually at 7.1 percent.

“We want to ensure that the large volume of tests at Urbana-Champaign does not overshadow the trends that we’re seeing in the broader region, and we don’t want to be inhibited from taking action to keep people safe,” Ezike said, noting IDPH would share the data without the U of I numbers and apply mitigations if regional metrics are hit with UI tests excluded.

“If regional metrics are tripped in Region 6 by looking at the data in this way, the entire region, including Champaign County, will still be required to implement mitigation efforts,” she said.