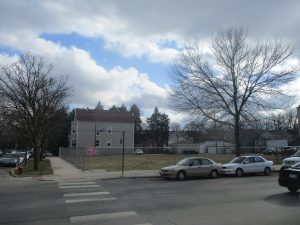 Oso Apartments will be built on this vacant lot at the corner of Bernard Street  and Montrose Avenue. (Photo by Igor Studenkov/for Chronicle Media)

The Chicago Housing Authority is working with West Loop-based Evergreen Real Estate Group to bring affordable housing to the Northwest Side of Chicago.

Oso Apartments will be located at 3441 W. Montrose Ave., on the Irving Park side of the Irving Park/Albany Park border. It will have 32 one-bedroom and 16 two-bedroom apartments, with amenities such as a community room and a bike room on the first floor. Twenty-nine of the units will be reserved for public housing residents, with priority given to residents who were displaced when CHA tore down most of its family public housing developments. The rest will be available to residents who meet certain income limits.

Evergreen and CHA are already working together on another affordable housing project in Irving Park — a mixed-use Independence Library project that will incorporate the new space for the currently closed Chicago Public Library branch and a mix of market-rate and affordable apartments. While affordable housing has generated some controversy in the nearby Jefferson Park, David Block, Evergreen’s Director of Development, told the Chronicle that the project has community support, especially in Albany Park, where housing affordability is a growing concern. The company expects to start construction this summer and start accepting tenants sometime in the summer of 2019.

Chicago has a long history of affordable, subsidized housing, where an organization or a government entity builds apartments that tenants can rent for a reduced price, with the organization that runs it covering the rest. According to Chicago History Museum’s Encyclopedia of Chicago, many of those early efforts were passion projects of wealthy philanthropists who wanted to improve housing conditions for workers. In 1937, the Chicago Housing Authority was established to create better housing for low-income Chicagoans. While some of those developments went up in the late 1930s, it wasn’t until after World War II that its efforts kicked into high gear. Because aldermen in majority-white wards tended to balk at public housing, most of it was built after 1949 was in majority-black neighborhoods.

Throughout the 1960s, the combination of building design issues, reduced maintenance, budget cuts and reduced tenant screenings led to deteriorating conditions. The situation only worsened in the following decades. By mid-1990s, CHA decided to demolish some of the most prominent family public housing developments — most notably, the high rises in Near North Side’s Carbrini Green, Near West Side’s Henry Horner Holmes and most high rise public housing buildings on the South Side. They were to be replaced with mixed-income developments that would have public housing units, affordable apartments and market-rate units. The residents who were displaced in the process and who were current on their rent at the time were given a right to return to public housing units in whatever would go up in demolished developments’ place, or, failing that, other public housing units throughout the city. 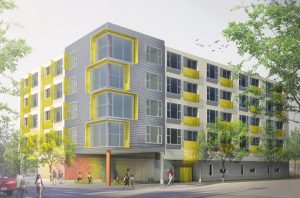 Oso Apartments will have 32 one-bedroom and 16 two-bedroom units, with amenities such as a community room and a bike room on the first floor. (Drawing courtesy of Evergreen Real Estate Group)

From the get-go, the number of public housing units in the new mixed-income developments was smaller than the number of occupied units in the high-rises they replaced. For the past 15 years, CHA’s strategy has been to either build or rehabilitate a total of 25,000 units. Rather than putting them in the same communities as the now-demolished public housing developments, it tried to scatter them all over the city. According to CHA’s 2017 Third Quarter report — the most recent publicly available report — as of Sept. 30, 2017, it completed a total of 23,337 units. This leaves a total of 1,663 units.

The 26 public housing units in Oso Apartments will be part of CHA’s Project Based Voucher program. Funded using the federal Rental Assistance Demonstration (RAD) program, it functions similarly to federal Housing Choice Voucher program. In both cases, private companies build and manage the units, with tenants paying the rent based on the portion of their income and CHA covering the rest. But with RBV, CHA dictates who those units can be rented to, and the amount tenants pay is smaller than what they would pay with Housing Choice Vouchers.

In Oso Apartments’ case, CHA will set up a waiting list. Public housing residents who have the right to return would get the first priority, with employed residents getting priority over the ones who are going to school and/or actively looking for employment. If there are any spaces left after that, they will go to the RBV waiting list.

Either way, the rent would capped at 30 percent of the tenants’ household income.

The remaining 19 units will be available to households that earn no more than 60 percent of the area median income. The exact number varies depending on the size of the household, but as of April 4, 2017, the cap is $33,180 for one person and $37,920 for two people. The rents would be affordable, which are capped by the city. The amount varies depending on whether tenants pay for utilities. According to the preliminary copy of the house rules provided to the Chronicle, tenants will have to pay for electricity, and they may be required to pay for gas heat. If the tenants are paying electricity only, the cap is $835 for one-bedroom apartments and $1,002 for two-bedroom apartments. If the tenants have to pay for gas heat, the cap drops to $802 and $964, respectively. 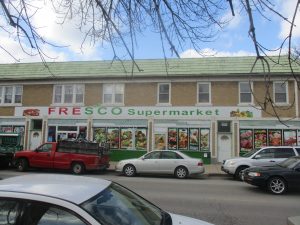 Fresco Supermarket is located right across the street from the future Oso Apartments site. (Photo by Igor Studenkov/for Chronicle Media)

The numbers from CHA’s 2017 Third Quarter report suggest that OSO apartments would only make a small dent in large pool of applicants who would be eligible for public housing units alone. Out of 16,846 originally eligible to return, 10,281 (approximately 61 percent of the original total) satisfied their right to return, 2,805 (17 percent) are no longer on the list because they were either evicted, deceased or lost their right to return for some other reason. There are 514 residents (3 percent) still fully eligible to return, and 3,246 (19 percent) residents haven’t responded to CHA outreach and were taken off the list, but they can still ask to be put back on.

And being on either wait list wouldn’t, in of itself, guarantee that the applicants get in. According to the Draft Tenant Selection Plan for Oso Apartments, the tenants will be screened, and they can be rejected based on a number of factors. Most notably, if any member of the household was ever involved in criminal activity, the management can reject the entire household — though it’s not necessarily a deal-breaker if the applicants can show “mitigating or extenuating circumstances.” For example, if a member of the household was convicted of using illegal drugs, completing or taking part in a rehab program would count in their favor.

According to its website, Evergreen is no stranger to affordable housing. It operates a number of family and senior developments in Chicago and its suburbs. That includes

Block explained that Oso Apartments will be built on a currently vacant lot at the southwest corner of Montrose Avenue and Bernard Street, across the street from Fresco Supermarket store. In fact, the name is a nod to the intersection.

The building would have five floors, and most of the first floor will be taken up by community amenities. 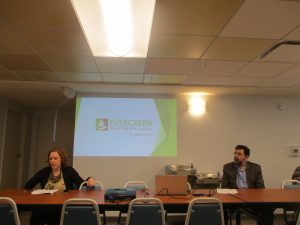 CHA and Evergreen officials lay out the details of what Oso Apartments will be like during the April 4 public hearing, which only one person attended. (Photo by Igor Studenkov/for Chronicle Media)

“There will be a nice community meeting room, a bike room, [and] some other nice facilities for residents there,” Block said.

Because the building is located only a few blocks south of Brown Line Kimball “L” station, Evergreen isn’t required to build enough parking spaces to accommodate all tenants. Block said that the building will have 22 parking spaces that tenants will be able to reserve on first-come/first-served basis.

According to the preliminary house rules, the building will be nonsmoking. And because it’s funded with federal grants, marijuana isn’t allowed — even if it’s strictly for medical use.

Albany Park has traditionally been a gateway neighborhood for recently arrived immigrants and refugees — in part due to its affordable rents. But that has been changing over the past two decades. The website for Albany Park-based Communities United states that, in the wake of the 2008 collapse of the housing bubble, the entire Northwest Side was adversely affected by the ensuing foreclosures.

“Post-foreclosure, rental properties were systematically evicted, and often sold to investors to then be converted into high-end developments that long-time residents and working families could not afford,” the site stated.

Proposals for affordable housing have occasionally triggered controversy on the Northwst Side. In February 2017, Ald. John Arena (45th Ward) unveiled a mixed-use development in Jefferson Park, at 5150 N. Northwest Highway, which was to include 80 affordable apartments and 20 apartments reserved for public housing residents. The project generated backlash, with residents complaining about the project’s size and density and expressing concerns that poorer residents will increase crime.

Block told the Chronicle that while Evergreen’s affordable housing developments had faced some community opposition in the suburbs, there was no such controversy in the city — and he didn’t believe Oso Apartments would be any different.

“It has the support of [Ald. Carlos Ramirez-Rosa (35th Ward)],” he said. “And the community supports it. There has been a lot of pressure, rents are going up, so there’s a lot of support in the community for [this project].”