Dozens of volunteers built 75 bicycles on Dec. 3 to donate on the following morning to kindergartners, first- and second-graders at a Chicago Title 1 elementary school. 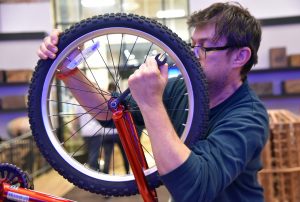 Philip Iplixian of Chicago is a volunteer from Athens, Greece who grew up in Florida. (Photo by Karie Angell Luc/for Chronicle Media)

The Windy City Bike Build was a two-hour bicycle assembly event where volunteers put together new bikes for kids.

The bicycles were presented as a surprise the next morning, along with helmets, to students attending Kozminski Community Academy at 936 E. 54th St. in Hyde Park.

The initiative was an event by Can’d Aid, an organization based in Colorado. The nonprofit entity has donated more than 2,800 bikes nationally to elementary school students.

“These are children that maybe don’t have as much opportunity or equipment to get outside and live an active, healthy lifestyle,” said Logan Firehammer, program coordinator for Can’d Aid.

“I think every kid and person remembers their first bike and the freedom that came with getting your first bike.

“It’s an amazing opportunity to be able to give back and it’s incredible to see how excited the kids get, knowing that they get to take those bikes home,” Firehammer said. 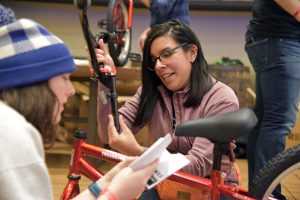 Before rapid fire bike assembly began, Firehammer thanked registrants, also telling them, “We believe in people-powered do-goodery which means we believe that every person’s capable of giving back and should give back,” she said.

“I guess I’ll figure it out, excited to help some kids, build some bikes,” said volunteer Brian Huynh of River North. “It will be a good learning experience.”

Adults could sip on beer while collaborating on the bike build where philanthropic fellowship was encouraged.

“I’m a huge cyclist so it means a lot for me to give back,” said Sam Peterson of Ukrainian Village, who assembled bike parts, provided in a large cardboard box. 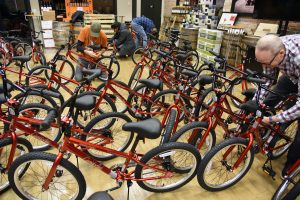 Bikes are staged before being taken one by one on board a U-Haul truck. (Photo by Karie Angell Luc/for Chronicle Media)

She worked as a team with fellow assembler Laila Eskin, also of Ukrainian Village.

“Being a huge part of the volunteer community, to help kids learn to bike and get on their bicycles, it makes me feel really good,” Peterson said.

Volunteer Lauren Gaynor of Bucktown said, “This is amazing, it’s so fun.

“I think this is perfect timing as well with the Christmas season and getting kids some bikes,” she added.

Gaynor said she felt like one of Santa’s elves and might have considered donning a festive elf hat.

“Just like Santa’s workshop in here,” Gaynor said with a smile.

Andy Heiden of Lakeview also volunteered in a Binny’s Beverage Depot tasting room which was temporarily repurposed as a seasonal toy workshop.

Heiden said he appreciates the work that elves do the days before Christmas, or all night long on Christmas Eve before sunrise, building Christmas morning toys and bikes.

“I have a lot of respect, it is very hard work no matter what you’re putting together,” Heiden said. “These toys and everything else can be very complicated, but once it’s all done, it’s very rewarding.”

Julie Malec of Lincoln Park wiped her brow during her solo bike build. 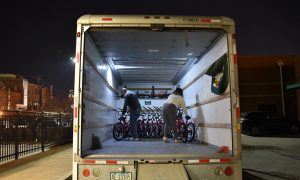 “Oh my God, brand new bikes … brand new!” Malec said incredulously. “Not second-, third-, fourth-hand, which is what most people get.

“Candy-apple red, oh my God! Everything is new, it’s amazing.”

“And I went,” she said, recalling, “What a great opportunity.”

Malec is one of seven siblings and remembers the hand-me-downs of her youth.

“No kickstand on mine, “she recalled of her childhood bike.

For Ceidy Vertin of Burbank, rolling newly built bikes on board a U-Haul truck was worth besting the outdoor parking lot evening chill.