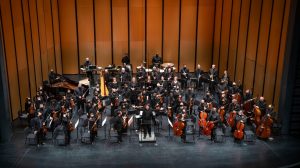 Chicago Philharmonic announces a 10 concert summer series that kicks off June 10 and will take place throughout the Chicagoland area.

The concert series includes the full spectrum of Chicago Philharmonic concerts with community-focused events for music-lovers of all ages and levels, a Juneteenth weekend Chicago debut of Marvel Studios’ Black Panther in Concert at The Chicago Theatre, virtuosic tango-inspired chamber programs, a week of pops concerts at Ravinia Festival, and the World Premieres by Jennifer Higdon and Thea Musgrave at the close of the National Flute Association’s 50th Annual Conference.

The summer series begins on June 10 with Grammy Hall of Fame’s Johnny Mathis and the full orchestra at the Four Winds New Buffalo Casino. For tickets and further information visit fourwindscasino.com.

On June 18, at 7:30 pm, the eve of Juneteenth, Chicago Philharmonic will present Marvel Studios’ Black Panther in Concert at the historic Chicago Theatre. The concert features a screening of the complete film with the musical score performed live to the film. Joining the orchestra for Ludwig Goransson’s Grammy and Academy Award-winning score is legendary talking drum player Massamba Diop, who created and recorded the “T’Challa” theme for the original score and recording. Tickets are available at chicagotheatre.com.

On July 9 at the Humboldt Park Boathouse and July 23 at Ping Tom Memorial Park, the organization presents the eighth year of its signature community engagement program, Side by Side with the Chicago Philharmonic, presented with the Chicago Park District’s Night Out in the Parks Initiative. For these popular concerts, students and community musicians are invited to apply to bring their instruments and play alongside Chicago Philharmonic musicians in rehearsing and performing free orchestral concerts in Chicago parks. This season’s program explores the oft overlooked classical music from Afro-Latino composers, including music by Rafael Hernandez, Lucho Bermudez, Astor Piazzolla, Celia Cruz, and Hector Lavoe Perez. Registration required at chicagophilharmonic.org.

On July 24, Chicago Philharmonic will return to perform with longtime partner Music by the Lake for a concert featuring The Irish Tenors. Declan Kelly, Anthony Kearns, and Ronan Tynan, collectively known as The Irish Tenors, have been the acknowledged Celtic music kings since they burst upon the scene during a 1998 PBS special. Since then, the trio has opened the door for countless Irish music groups to hit the United States, but the Irish Tenors cannot be duplicated. For tickets and more information, visit musicbythelake.com.

Finally, on Aug. 13, Chicago Philharmonic performs its second major Jennifer Higdon premiere in 2022 at the 50th Anniversary National Flute Association Gala Concerto Concert at Symphony Center. Led by Maestro Leonard Slatkin, the concert features the world premieres of Jennifer Higdon’s “The Light the We Can Hear” and of “Piccolo Play for Piccolo” and String Orchestra by Thea Musgrave. Plus “Malambo” by Miguel del Aguila, Concerto for Flute and Orchestra by Carl Reinecke, and “The World of Montuagretta” by Christian Lindberg, performed by Valerie Coleman, Jennifer Gunn, Kersten McCall, Demarre McGill, and Sharon Bezaly. For tickets and further information, visit nfaonline.org