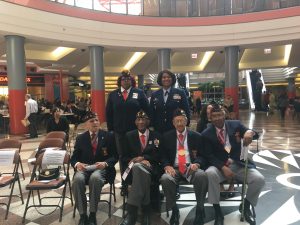 Members of an elite African American WWII unit of the U.S. Marines were honored Feb. 22 at in a ceremony at the State of Illinois James R. Thompson Center. Five Congressional Medal of Honor recipients, members of the Montfort Point Marine Assn., were called “trailblazers.” The 2017 Salute to African American Veterans was presented by the Illinois Dept. of Veterans Affairs.

“You have made it possible for me to stand here today, in this uniform, wearing a rank and holding a position that during your time could only be viewed from afar,” said Coast Guard Commander Zeita Merchant, who heads Chicago’s Marine Safety Unit.

Montford Point, NC was the site of a segregated training camp where more than 20,000 African Americans trained between 1942 and 1949. Recruits went on to become the first African Americans to serve in the U.S. Marine Corps. “Loyalty and Service in the Face of Prejudice and Discrimination” is the slogan of a special archive collection of online oral histories and photographs at the University of North Carolina.

Corp. Harry Hamilton, awarded at the Chicago ceremony, is interviewed in the UNC archives.

From Tutwiler, Mississippi, Hamilton served between 1943 -1950 in the 52nd Defense Battalion, according to the archive website. Hamilton participated in “occupation duty” on both Saipan and Guam. After the war, Hamilton worked for the U.S. Post Office in Chicago for 37 years, according to his biography.

“It is a blessing to see you sit here … proud … triumphant … still lending your shoulders for me and others to stand on you, our dear Monfort Point Marines, are the truest of American Heroes,” Merchant said at the ceremony.