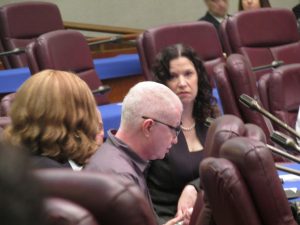 Mickey Ray Mahoney, an adjunct professor at the School of the Art Institute of Chicago, tells a City Council committee last week about the trials of using rest rooms as a transgender individuals. (Photo by Kevin Beese/for Chronicle Media)

At 6-foot-4, 214½ pounds and a deep voice, Chicago filmmaker Lilly Wachowski is unmistakably male, but that is not who Wachowski is.

The writer of the “Matrix” movie series is transgender.

Because of her large frame, Wachowski said, she regularly receives snickers, eye rolls, stares and photo snaps when out in public.

“I am hyper-aware of others’ attention,” Wachowski said.

When recently in the dressing room of a store’s women’s section to find the right-size sweater to replace a gift from her boyfriend, Wachowski said she heard a woman asking for a manager to find out the store’s policy about men in the women’s dressing room.

The Chicago City Council’s Committee on Human Relations has passed legislation that eliminates wording in the city’s municipal code regarding access to public accommodations, such as bathrooms and dressing rooms, that requires individuals to show a driver’s license, when requested, before entering a bathroom or other gender-specific location of his or her choice. The change, approved at last week’s committee meeting and slated to go before the full City Council on June 22, would allow individuals to freely enter the bathroom of his or her choice without being contested.

When Chicago passed the public accommodations ordinance in 2002, it was seen as groundbreaking. Fourteen years later, the requirement of having to show a driver’s license to enter a bathroom seems North Carolina-like to many aldermen and individuals in the transgender community. North Carolina has come under fire for passing a law that forces transgender individuals to use the bathroom that corresponds to their sex at birth.

William Grieves, who worked on Chicago’s 2002 ordinance, said that the clause about having to present a government-issued identification card was simply put into the legislation to get enough votes for passage.

Mickey Ray Mahoney, an adjunct professor of film, video, new media and animation at the School of the Art Institute of Chicago, said as a transgender individual the fear of going to the bathroom is excruciating.

“I will work a full school day before going to the bathroom,” Mahoney said, adding that transgender students he knows will do the same thing. “We always wonder who is going to say something to us.” 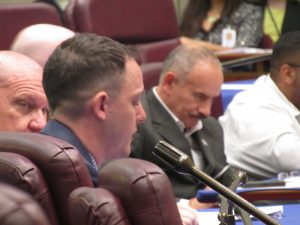 Owen Daniel-McCarter, policy and advocacy director of the Illinois Safe School Alliance, which promotes safety, support and healthy development for lesbian, gay, bisexual, transgender and questioning youth in Illinois schools and communities, testifies before a City Council committee about the trauma of being a transgender individuals and always worrying about being asked for identification, allowed under city law currently, when going to a public restroom. (Photo by Kevin Beese/for Chronicle Media)

Mahoney said with the current license requirements, he “could be stopped by whomever” and restricted from using the bathroom because his license still says female due to medical conditions he needs addressed.

Dorothy Clay was the only person to give public testimony at last week’s hearing against the proposed law change, saying she was concerned predators would use the revision to make their way into the bathroom of the opposite sex.

Safety was also a concern of some aldermen who were not ready to get behind the change in legislation.

“No one wants to see discrimination against the (lesbian, gay, bisexual and transgender) community or any other community, but we are creating an ordinance based on the honor system,” Ald. Anthony Napolitano (41st Ward) said. “Anyone can choose to go in whichever bathroom they want.”

Both he and Ald. Nicholas Sposato (38th Ward) feared the “knucklehead effect” where a boy would go into women’s restroom or female locker room, declare they are transgender that day, and that there would be no repercussion for his actions, under the law change.

Michael O’Connor, an activist and member of the LGBT Hall of Fame, said he was astonished that the Human Relations Committee spend more than three hours addressing the proposed law change.

“I don’t understand how political providing equal access can be,” O’Connor said.

He said as the law is written he, as an openly gay man, can freely walk into a men’s bathroom, but a transgender individual cannot.

“Our children are more in danger of being shot in the streets than being attacked by a member of the LGBT community in a washroom,” O’Connor said.