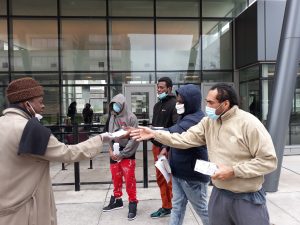 Chicago businessman Willie Wilson (left) distributes money to individuals he bailed out of Cook County Jail on April 30. Wilson bailed out 12 individuals who were being held in the jail on misdemeanor, nonviolent charges because they could not pay their bail. Wilson said he made the gesture because he did not want the individuals stuck in jail with the coronavirus so prevalent in the facility. (Photo by Kevin Beese/Chronicle Media)

Having just been freed from Cook County Jail by a man he had never met, Robert Harrington smiled and rolled his thanks and praise into a single sentence.

Harrington was one of 12 people that Wilson, a Chicago businessman and philanthropist, bailed out of Cook County Jail on April 30.

All 12 were individuals charged with nonviolent misdemeanors and remained in jail because they were not able to post bail, Wilson said.

Normally, an individual must post 10 percent of their bond amount to get out of jail on bail. A bond set at $10,000, for example, would require a bail payment of $1,000 for the person to be released from custody.

Wilson said it was not right that with COVID-19 so prevalent in Cook County Jail that individuals charged with nonviolent offenses had to remain in the facility simply for a lack of money.

“I am bailing them out, so they don’t catch the coronavirus,” Wilson said.

As of Saturday May 2, 274 detainees in custody at Cook County Jail had tested positive for COVID-19, including 11 individuals being treated at local hospitals.

Another 232 detainees in custody are no longer positive for the virus and are being monitored at a recovery facility at the jail.

Six detainees who tested positive for COVID-19 have died while receiving treatment at local hospitals.

There are 134 correctional officers and 33 other Cook County Sheriff’s Department employees who have tested positive for the coronavirus. 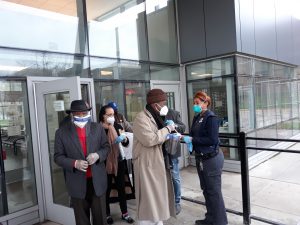 The Sheriff’s Department said 212 of its employees who previously tested positive recovered and have returned to work.

One correctional officer at the jail died as a result of complications due to COVID-19.

He also gave a handful of the detainees $400 each to help them get back on their feet.

Wilson said he would like for Gov. J.B. Pritzker to issue an executive order stopping jails in the state from locking up individuals charged with nonviolent misdemeanors who cannot post bail.

“It’s unfair,” Wilson said of individuals being held in jail for charges in nonviolent incidents simply because they can’t make bail. “We are doing the best we can to speed up the process.”

U.S. Rep. Danny Davis, D-7th, praised Wilson for his continued work on behalf of the area’s most vulnerable resident during the COVID-19 pandemic.

“Dr. Wilson continues to work on behalf of the dismissed people,” Davis said.

He said people not being able to make bail for nonviolent, misdemeanor charges is something that needs to be addressed on the federal level. 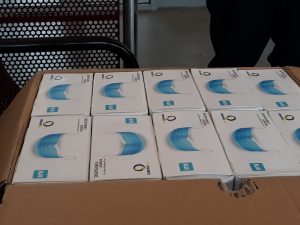 A box of masks that Wilson donated to the Cook County Sheriff’s Department. (Photo by Kevin Beese/Chronicle Media)

“No one should be in jail just because they don’t have the money to pay their bail,” Davis said.

Attorney Richard Boykin, who helped Wilson in his efforts to bond out the 12 detainees, said some of the individuals’ bail amounts were as low as $150.

“Taxpayers have to pay $168 a day for someone to be in Cook County Jail,” said Boykin, a former Cook County Board member.

Boykin called Wilson “a real angel, a lifesaver” for his ongoing efforts to help people.

Natalie McLain said her husband had been in Cook County Jail for two months before Wilson posted bail for him.

“I love Willie Wilson for doing that for him,” McLain said.