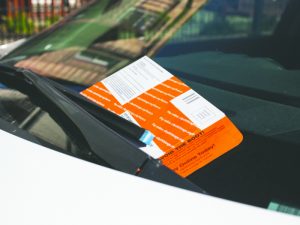 Chicago residents have the opportunity to get out of debt for city sticker tickets. The first step is to buy a new city sticker by Oct. 31. (WGLT photo)

The two-step program will give residents the opportunity to purchase a city sticker with no late fees or back charges, and then will offer an opportunity for those in compliance by Oct. 31 to have their city sticker tickets forgiven at a later date.

Lightfoot said the program “marks a fresh start and a historic first step for Chicago residents who have struggled to get from underneath the grip of crushing ticket debt.”

“These reforms we are announcing in partnership with Cle​rk Valencia offer more pathways to compliance, provide much-needed ticket debt relief and build on our investment in the overall economic health of our residents,” Lightfoot said.

“Our goal has always been to build a Chicago that works for all of our residents,” Valencia said. “When I started the Fines, Fees & Access Collaborative, I knew that working in conjunction with community advocates and other city departments would lead to something historic. That’s why I’m so thrilled to announce the implementation of these reforms, which represent a monumental step forward in creating a more equitable city that allows all of our residents to thrive.”

The city sticker debt-relief reforms will roll out beginning Tuesday (Oct. 1). To take full advantage of the programs, residents are encouraged to:

“Thanks to the tremendous work being done by Mayor Lightfoot, Clerk Valencia, the City Council and our steadfast advocates, Chicago is working to change the broken ticketing system and to offer new opportunities to get out of debt for thousands of Chicago residents,” said Ald. Michael Scott (24th Ward). “We have begun to turn the corner on regressive laws by bringing comprehensive reforms and ensuring equity across our neighborhoods.”

Lightfoot said the amnesty and debt relief program is the beginning of a historic, comprehensive effort by the city to help remove barriers and offer meaningful pathways to compliance with city stickers.

To learn about city sticker amnesty and debit-relief options, residents should visit www.Chicago.gov/citystickerdebtrelief.

Ald. Pat Dowell (3rd) said the announcement “marks a new chapter in relieving the burden on those affected by Chicago’s historically regressive fines and fees system.

“Working with Mayor Lightfoot and Clerk Valencia to enact these new reforms, we are not only making it easier to get a city sticker, but we are helping provide pathways to compliance to help more residents get back on track,” Dowell said.

The city sticker program and other debt relief are made possible by legislation passed by the City Council in September. The reforms were developed with input from the Fines, Fees & Access Collaborative, formed by Valencia in December.

“When it comes to the regressive fines and fees that have impacted low-income residents the most, many feel like the deck is stacked against them,” said Ald. Scott Waguespack (32nd).  “By creating a pathway to come into compliance and clearing out some of the old debt that may have been holding people back, we are giving our residents a second chance. We encourage all residents to seize this opportunity in October to purchase a city sticker penalty-free, and to take advantage of a fresh start.”

In addition to tackling city sticker debt, Lightfoot’s fine and fee reforms package calls for: ending driver’s license suspensions for non-payment of non-driving and vehicle compliance violations, creating more accessible payment plans for all motorists, introducing boot-reform policies for those experiencing financial hardship and reforming the city sticker fines that have thrown some residents into a cycle of debt. The legislation will transform the city’s fine and fee rules structure for non-driving violations and will go into effect on a rolling basis through November.

“At the Jobs Council, we have heard from too many people trapped in a cycle of ticket debt with suspended licenses, impounded cars and no clear pathway to relief,” said Eric Halvorson of the Chicago Jobs Council. “This amnesty and debt-relief period is an important opportunity for people to clear up some of this debt, and we applaud the city of Chicago for taking action to help residents and improve equity for our communities. I hope anyone and everyone with city sticker tickets or debts will take advantage of this opportunity to come into compliance and get some debts forgiven.”

To take advantage of City Sticker Amnesty Month, visit the city website, any City Clerk or Department of Finance location or stop by one of several Mobile City Hall locations held during October.