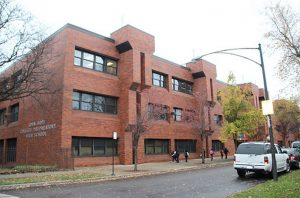 Hope High School in Chicago’s Englewood neighborhood will be closed at the end of this school year under a Chicago Public Schools plan linked to the opening of Englewood STEM High School. Hope currently has no enrolled students.

Hope currently has no enrolled students and was recommended for delayed closing in 2017 with the opening of Englewood STEM High School.

Prior to a potential Chicago Board of Education vote, CPS will hold two community meetings and a hearing to gather public feedback on the proposal.

Bringing students back
In 2017, CPS announced a proposal to strengthen high school options in Englewood by investing in a new high school, closing Robeson High School and delaying closure of three other under-enrolled high schools (Harper, Hope and TEAM). The Board of Education approved that proposal in February 2018, and earlier this school year the new, $85 million Englewood STEM High School opened its doors for more than 420 freshman students.
Prior to the opening of Englewood STEM, the area had the highest rate of students traveling to other neighborhoods for high school. Englewood STEM High School has successfully reversed that trend, and the neighborhood school now supports nearly as many students in the freshman class as were enrolled in all grade levels at all four Englewood high schools during the 2017-18 school year, according to CPS officials.

Proposed closure
As part of the school actions approved in February 2018, the district established transition plans to allow students at Harper, Hope and TEAM to remain at their schools through graduation or transfer to another high school by the end of 2020-21. TEAM High School was approved for closure in February 2019 because of having zero students enrolled, and now the district is proposing the closure of Hope High School for the same reason at the conclusion of the 2019-20 school year.
At the end of last school year, Hope had 20 students enrolled, all of whom have successfully transitioned to other high schools prior to the beginning of the 2019-20 school year. Each high school receiving transfer students are receiving $6,100 per student in supplemental funding to provide academic, social and emotional, and other supports to these students during SY19-20 and SY20-21 based on their specific needs. CPS said it continues to support former Hope students who recently transitioned as well as those who transitioned after the initial school action was announced.

Upcoming meetings
Before the board’s vote, community meetings and public hearing will be held to allow members of the public to provide additional feedback for consideration.

The earliest potential vote by the Board of Education on the proposal would occur in February following the two community meetings and public hearing.
For additional information on the proposal, including detailed draft transition plans, visit cps.edu/Transitions.
Chicago Public Schools serves 355,000 students in 642 schools. It is the nation’s third-largest school district.