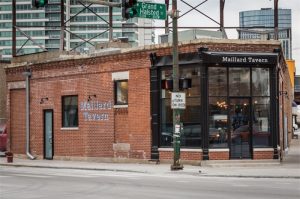 The Maillard Tavern in Chicago, which has been closed since March 16 due to the COVID-19 outbreak in Illinois, filed a lawsuit this week against an insurance company for refusing to pay out a claim under the tavern’s “business interruption” policy. (Credit: Submitted by Maillard Tavern)

SPRINGFIELD — A Chicago tavern that was closed since March 16 due to the COVID-19 outbreak in Illinois filed a lawsuit this week against an insurance company for refusing to pay out a claim under the tavern’s “business interruption” policy.

Attorneys for Maillard Tavern said during a video news conference Wednesday that the actions by Wisconsin-based Society Insurance are part of a pattern by insurance companies nationwide of denying any and all such claims and arguing the policies do not cover business losses caused by a pandemic.

“Maillard Tavern made a claim. Society Insurance Co. denied it, although they accepted the premium payment for it,” Antonio Romanucci, one of the attorneys handling the case, said. “Instead, the insurance industry as a whole is blanketly refusing to honor business interruption claims.”

The suit, filed in Cook County Circuit Court, seeks an unspecified amount of damages to be determined by an appraisal, and it asks the court to appoint an independent “umpire” if appraisers from the two sides cannot agree on an amount.

The case is the first one of its type in Illinois stemming from the COVID-19 outbreak, but attorneys said they expect there will be many more, and there have been similar suits filed in other states.

Business interruption policies are a standard type of business insurance that provide coverage when a business is forced to close, or its operations are severely limited, through no fault of the business. Many policies exclude certain types of events, including pandemics, but attorneys for Maillard Tavern say the company’s policy was an “all-risk” policy with no exclusions.

The lawsuit is just one illustration of the staggering economic losses being felt throughout the country as a result of the pandemic, and the issue of insurance company liability already reached the highest levels of the federal government.

On April 2, several insurance groups signed a letter to members of Congress estimating total losses just for small businesses with 100 or fewer employees could range between $220 billion and $383 billion per month, while total reserves held by all U.S. home, auto and business insurers combined was only about $800 billion.

“Standard commercial insurance policies offer coverage and protection against a wide range of risks and threats and are vetted and approved by state regulators,” the letter stated. “Insurance coverage works by spreading risk, but that model simply cannot account for a situation in which losses are catastrophic and nearly universal. Standard business interruption policies do not, and were not designed to, provide coverage against communicable diseases such as COVID-19, and as such, were not actuarially priced to do so.”

But the issue gained even more traction on Friday, April 10, when President Donald Trump spoke about it during an extended news conference. The president said he believed insurance companies should have to pay the claims. Soon after those comments, seven Republican senators wrote to Trump arguing business interruption policies do not typically cover losses from a pandemic absent a specific rider to that effect and warning him of the possible consequences if insurance companies were forced to cover such losses retroactively.

“Adding another point of stress during these times, this would likely put our businesses in an even worse position — draining the U.S. insurance reserves to pay these claims could leave us in a position of having inadequate reserves to cover claims that are actually intended to be covered, such as damage from wind, fire, hail, and other covered perils,” the senators wrote.

Romanucci, however, rejected the argument that the insurance industry could be crippled by the volume of claims and that they couldn’t have foreseen the possibility of a pandemic.

“We’re not going to bankrupt the industry,” he said. “The industry has the money. They just won’t tell us how much money they have. They wrote this policy with their attorneys. They understood the provisions of the policy if there was indeed a pandemic. That’s why some insurance policies exclude for pandemics. So, for them to say they didn’t know, I think, is false information.”

The case is scheduled for an initial hearing Aug. 13.