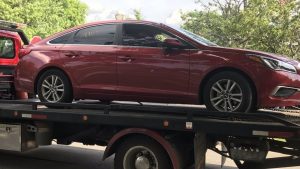 A car with bullet holes is towed away after a shooting Saturday (June 27) in Englewood that killed a 20-month-old boy. (Fox 32 photo)

Chicago police are investigating the fatal shooting on a toddler in the city’s Englewood neighborhood.

Another vehicle pulled up alongside and an offender inside the vehicle produced a gun, firing at the passenger side of the woman’s vehicle.

Police said the woman drove to St. Bernard Hospital for treatment. The woman was listed in stable condition, but the boy was pronounced dead at the hospital.

Area 1 detectives are investigating the incident.

Police Superintendent David Brown called on anyone with information about the incident to come forward.

“We all need to be outraged by the violence we are seeing in our city,” Brown said in a statement. “This baby, and all of our residents, deserve better.