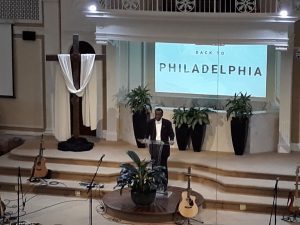 The Rev. Florin Cimpean, senior pastor of Philadelphia Romanian Church on Chicago’s North Side, looked out over the smattering of parishioners in church pews and smiled.

It was a far cry from the 400 people who pack the church for an Easter service, but it felt just as special as church members came together Sunday for the first time in two months to worship.

Philadelphia Romanian was one of 100 churches in the area that opened and had services Sunday in defiance of Gov. J.B. Pritzker’s stay-at-home order.

“We believe in God more than the government,” Cimpean told parishioners at the start of Philadelphia Romanian’s service.

When the governor amended his executive order to include “free exercise of religion” as an “essential activity,” Cimpean took that as a way to allow church members into the building again.

“We had the opportunity to open our church to our congregation,” Cimpean said from the church’s worship area with “Welcome back to Philadelphia” on the background screen.

However, the governor’s order limited church gatherings to 10 people. Philadelphia Romanian, a church with 600 parishioners, had more than 40 people on hand Sunday. Church personnel did stop people at the door wanting to go in and had many pews taped off so they could not be used.

The church also provided a livestream of the service for those unable to attend.

After singing with the congregation, Chicago philanthropist and businessman Willie Wilson said he had another song come to mind.

“I’m so happy to be here I feel like singing some James Brown ‘I Feel Good,’” said Wilson, who has said the governor’s stay-at-home does not go far enough in allowing church congregations to meet.

Wilson thanked Cimpean and congregants who came to the service “for standing up for the Lord.” 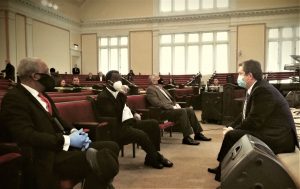 Philadelphia Romanian officials limited the numbers of people inside the church service, having individuals sign up for a spot in advance on the church’s website. Church officials said that no children under 10, seniors or people with underlying health conditions were allowed into the service. However, one family was present in the service with young children.

During his talk to parishioners, Wilson asked congregation members to pray for politicians, including Pritzker and Chicago Mayor Lori Lightfoot.

He encouraged individuals to continue to follow social distancing guidelines and to wear masks in public but said that if churches follow health protocols, they should be allowed to reopen to congregants.

“I miss church,” Wilson said to applause from congregants.

The Chicago businessman said showing one’s faith is vital in these difficult times.

“Even though there is no medicine that man has made as of yet, there is one man who can kill this problem right now — and that man is Jesus,” Wilson said.

Wilson stood with area pastors earlier in the week when they announced their planned defiance of the governor’s stay-at-home order.

“The church is the foundation of our soul. People need hope in these challenging times and the church offers that hope,” Wilson said during a press conference Thursday at the Thompson Center in Downtown Chicago. “If big box stores and grocery stores have the right to welcome more than 10 customers, so do churches as they are ‘essential’ for our spiritual well-being.”

He said he could not stay silent when people are looking for hope and inspiration.

“I will not stand by while the state limits the number of people who can fellowship in church,” Wilson said. “I support the courageous pastors who have decided that it is time for the church to open its doors to the community.” 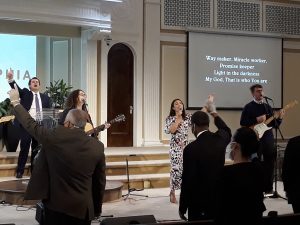 Chicago police did not make getting to local services easy, putting up temporary “No parking signs” on streets near some of the churches.

A Chicago resident told the Chronicle that in at least one case, police blocked the entrance to a church parking lot.

Chicago police did not confirm the blocking of the church lot, but did say steps were taken to limit potential large gatherings.

“We need the help of all residents to save lives so we can ultimately move on from the COVID-19 pandemic,” the Chicago Police Department said in a statement. “That’s why we’re asking residents to stay home and practice social distancing so that once we have begun to recover and reopen, residents can return to their religious services in a safe manner. As the Chicago Police Department continues working with all residents in the city to ensure full compliance with the mandate, officers will continue to monitor any possible large gatherings in their districts and issue any citations where necessary.

“In an effort to ensure the public safety of our residents, the city has temporarily banned parking alongside certain establishments as a precaution to prevent planned large gatherings from taking place.”

City officials continue to say that any businesses, establishments, or organizations not abiding by stay-at-home orders will be issued citations.

Police officers knocked on doors in some of the areas around churches to ensure that residents were aware of and not inadvertently impacted by the parking enforcement.

Bob Szontagh, a 30-year resident of the North Side, is not a Philadelphia Romanian parishioner, but went to the church Sunday to show his support for its actions.

“The mayor’s last name is Lightfoot, but she is bringing a heavy hand to all this,” Szontagh said. “You can have 500 people in Menard’s, but you can’t have 12 people in a church? Where is the logic in that? What she is doing doesn’t make any sense.”

Szontagh said it is time for some sensibility to be used with the restrictions. He said he wants to be behind the city and state’s efforts but said that some common sense needs to be used in decision-making.

“We are living in a difficult situation. I want to be supportive, but people are being repressed,” Szontagh said.

He said less politicizing of issues would go a long way toward improvements.