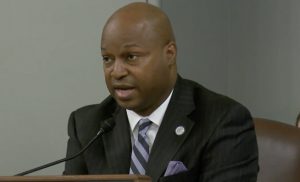 State Rep. Emanuel “Chris” Welch, D-Hillside, introduces the Qualifications Challenge Committee’s purpose and aim during its first hearing Feb. 25 in Springfield. He said the process to determine whether Democratic Rep. Eva Dina Delgado was appointed legally would be “an equitable process that logically and judiciously evaluates the complaints in the context of the existing rules and laws.” (BlueRoomStream.com)

SPRINGFIELD — A panel of nine representatives, during a 10-minute procedural meeting Feb. 25, began the process of evaluating whether former Rep. Luis Arroyo’s replacement was appointed legally.

At issue is whether “the legitimacy” — as House Speaker Michael Madigan said in a statement – of Democratic Rep. Eva Dina Delgado’s appointment was compromised by the use of Arroyo’s committeeman votes to appoint her, and whether those votes could be exercised by a proxy.

Arroyo resigned from his seat effective Nov. 1, before a special investigative committee was to consider his expulsion. He is charged by federal officials with bribery and pleaded not guilty at a hearing earlier this month.

Delgado, in a written statement shared with reporters by her attorney, countered that “the appointment process followed the law every step of the way,” and they will be filing a motion to dismiss the challenge.

Mary Eileen Cunniff Wells, from Chicago-based Miller Shakman Levine & Feldman, said Delgado was unable to speak with reporters because she did not have a voice due to campaigning.

The schedule dictating further action, agreed upon by all nine members of the Qualifications Challenge Committee, could render its investigation moot. Members of the panel will not meet to consider arguments presented by Delgado and two lawmakers who filed challenges until March 25 — just over a week after Illinois’ primary elections. By that date, constituents in the 3rd District might have voted to make Delgado the Democratic nominee in a district where no Republican filed to be on the general election ballot.

Responses to the challenge filed by attorneys representing both sides will be issued before the primary.

The protests to Delgado’s appointment filed by House Minority Leader Jim Durkin, from Western Springs, and Rep. Anne Stava-Murray, a Democrat from Naperville, allege Arroyo “had a hand” in choosing his successor despite opting to appoint a surrogate to use his votes.

According to Illinois’ Election Code, vacancies are filled by local party officials, who get a weighted vote in proportion to the number of votes in that district the resigning lawmaker received. As a Chicago committeeman, Arroyo had 36 percent of the votes in that appointment process, which he opted to allow another alderman to cast.

“Although Mr. Arroyo was not present for the actual vote, his decision to give his votes to be voted by proxy had the same effect as if he was present at the actual vote to fill the vacancy,” Durkin wrote in his complaint. “…By allowing Mr. Arroyo a role in the selection of his replacement, calls into question the integrity of the process and the House itself.”

Ann Lousin is a professor at the John Marshall Law School in Chicago and helped write the Illinois statute allowing local party officials to fill legislator vacancies. She said the argument that Arroyo’s proxy vote invalidated Delgado’s appointment is one she has never seen before.

Both chambers of the General Assembly have “enormous power” in deciding the qualifications of its own members under the federal and state constitutions, Lousin added.

“They can, within federal constitutional and, to a certain extent, Illinois constitutional parameters, they can make an awful lot of decisions that the courts will go along with,” she said.

Delgado was sworn in on Nov. 15 to complete Arroyo’s term. Gov. J.B. Pritzker commented before then about the former representative’s attempt to choose his replacement, calling the move “unacceptable given the charges against him.”

That would “taint a successor, and I call on the House of Representatives not to seat the person who is selected if [Arroyo] participates,” the governor said at the time.

Madigan also criticized Arroyo’s role in the process to fill his vacancy.

“Any process that includes the participation of [Arroyo] — whether by direct vote or proxy — would call the legitimacy of the appointment into question, and the qualifications of their candidate would be challenged by the full Illinois House of Representatives,” he said in a statement on Nov. 11.

Both officials did not have a comment about the hearing or Delgado’s appointment. A spokesperson for the speaker, though, said Delgado has been participating in caucus meetings.

The committee’s chairperson, Hillside Democratic Rep. Emanuel “Chris” Welch, and both challengers referenced the lack of trust Illinoisans’ have in the General Assembly. Welch said both chambers’ work to restore that public trust “remains ongoing.” Durkin, in his memo, said “a clean break” from Arroyo “is required to re-establish” that trust.

But Delgado said the two petitions challenging her qualifications are “purely political” and “lack any basis in law.”

“But rather than restoring the public’s trust in the General Assembly, these politically-motivated, meritless objections reinforce the public perceptions that every issue must be made into a partisan issue, with one party or the other portrayed in a negative light,” she said in the written statement.

The rules governing the Qualifications Challenge Committee largely mirror those used during the last such protest — in 2004, when former Rep. Patricia Bailey’s residency was challenged. She was later found guilty of listing a false address on her election forms.