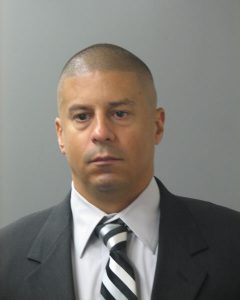 A 10-year Cook County correctional officer has been charged with beating an inmate.

Miguel Ortiz, 44, was charged with official misconduct in connection with the incident that prosecutors say was caught on video surveillance.

A detainee in Cook County Jail was being moved Jan. 17, 2014, by officers in a medium-security wing at the jail when the incident occurred.

Ortiz has been a full-time correctional officer with the Cook County Sheriff’s Department since Nov. 20, 1995. The charges stem from an investigation by Cook County State’s Attorney Anita Alvarez’s Professional Standards Unit and the Sheriff’s Office of Professional Review.

A male detainee was being transferred to a different division of the jail when he got into an argument with correctional officers about the condition of his new cell, prosecutors said. They noted that the detainee told officers that he would not go into a cell that had just been used to quarantine a sick inmate. He dropped his blankets, refusing to go into the cell saying it had “quarantine.”

Prosecutors said Ortiz was working in a control room across the hall from where the detainee was and overheard the conversation. He approached the inmate and reached for his arm to escort him into the cell. The prisoner pulled his arm back, falling to the ground and a correctional officer who had been part of the escort went to handcuff the prisoner.

According to prosecutors, Ortiz then knelt down and punched the prisoner in the face and head seven times.

The prisoner was taken to the county’s Cermak Health Services where he was treated for blunt trauma to the head.

Prosecutors said the incident was captured on two of the jail’s surveillance cameras.

Ortiz appeared in bond court July 29 at the Leighton Criminal Court Building in Chicago where Judge James Brown released him a $10,000 I-bond, a no-cash bond. The corrections officer will next appear in court Aug. 18.

Ed Yohnka, director of communications and public policy for the American Civil Liberties Union of Illinois, said video is changing the law-enforcement scene.

“I think if you look across the landscape, video is now a check or oversight over law enforcement,” Yohnka said. “All the events and incidents of the last few years were generated and needed to be addressed because of video. It is hard to refute the assertion that things would not be in play or that we would be having these discussions of very important issues, if not for video.”

He said security cameras in jails and prisons are a way to protect both the detained and those working in the facilities.

“The truth is cameras provide an objective, completely unbiased recording to an event,” Yohnka said. “You have the rights of detained individuals and prison guards protected from unfounded charges.”

He cautioned that correctional facilities need to be careful not to go too far and be overly intrusive. He said people have a right to expect some level of privacy in places like a bathroom and cameras not to be on them, even in prison.

“How we treat those who are detained has become a very important issue for us,” Yohnka said.

If convicted, Ortiz could face between two and five years in prison.