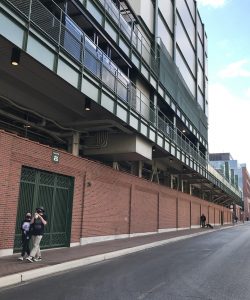 Waveland Avenue outside Wrigley Field is nearly empty while the Cubs played the Miami Marlins inside in a National League Wild Card playoff opener. (Photo by Jack McCarthy/Chronicle Media)

It was hard to tell that playoff baseball had returned to Chicago’s Wrigley Field this week.

Throngs of happy fans were absent and the typical buzz outside the park was lacking as this most bizarre of baseball seasons continued with the Chicago Cubs hosting the Miami Marlins in a National League Wild Card postseason opener on Wednesday, Sept. 30.

The COVID-19 pandemic nearly killed off the 2020 campaign before Major League Baseball devised a makeshift 60-game regular season with games at empty ballparks.

Now there’s an expanded NCAA tournament-style playoff that will send teams to later rounds of Regionals — um, make that limited access bubbles — in Texas and California before a World Series in Arlington, Texas.

The Cubs’ 32 home playoff games since a lengthy postseason drought ended in 1984 have typically drawn packed houses of excited fans. Hundreds more milled outside or patronized nearby bars, restaurants and shops amid a heavy police presence.

But on a breezy, partly cloudy Wednesday the environs of Clark and Addison had an empty offseason feel.

While ballhawks remained a fixture outside the left field wall along Waveland Avenue awaiting home runs, a walk around the rest of Wrigley Field’s perimeter revealed largely empty streets and sidewalks.

At Gallagher Way, a park-like open space along Clark Street, a souvenir shop had just two customers and the Cubs’ trophy room — home to 2016 World Series hardware — was shuttered and brown wrapping paper covered the windows. 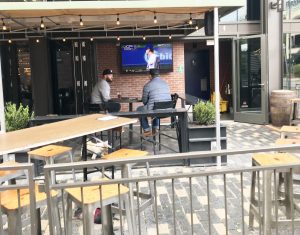 There’s plenty of room to sit, consume an adult beverage and watch the Cubs game at a bar just steps away from a Waveland Avenue entrance to Wrigley Field. (Photo by Jack McCarthy/Chronicle Media)

At an open-air bar on Waveland, a dozen steps from a Wrigley Field entrance, a handful of fans and a security guard accompanied by a friendly yellow Labrador were watching the game on large screen televisions.

They all cheered as outfielder Ian Happ’s fifth-inning solo home run gave the Cubs a 1-0 lead.

Wrigley Field’s fake crowd joined in. Recorded shouts and cheers — replacement audio used to imply a real game atmosphere — reached a crescendo and echoed through the plaza and off surrounding buildings.

In reality there were no fans inside. The closest they could get were rooftop seats atop buildings along Waveland and Sheffield avenues.

No fans have been permitted this season inside either Wrigley Field or Guaranteed Rate Field, home of the Chicago White Sox.

Even reporters covering the teams — usually granted wide latitude and access to the parks and clubhouses — had their movements severely restricted and all interviews conducted via video applications.

The Cubs reached the postseason as National League Central Division champions. The crosstown White Sox also qualified in the American League despite a late season fade and played a wild card series in Oakland.

The Cubs’ longtime rivals — the St. Louis Cardinals — also reached the playoffs as a wild card entry and played at San Diego.