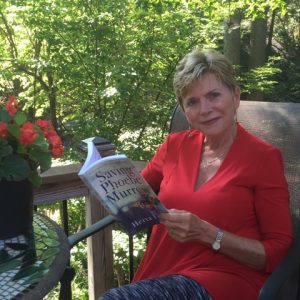 Washington, D.C. author Herta Feely says her newest novel is inspiring readers to remember their own pasts — and it’s not pleasant.

“Saving Phoebe Murrow,” released this month, tells the story of the cyber-bullying of a young girl and the stress of mother-daughter relationships. Feely recently visited Deerfield’s Briarwood Country Club for a reading.

“[Readers] have talked about how the book made them remember getting bullied as teens,” Feely said. “But at least back then you could get away from your tormentor. The internet is 24/7 and that ‘s what makes it so intense.”

The book explores the dangers of the Internet and a workaholic mother’s tricky life balance. The mother of Phoebe Murrow almost lets her daughter fall through the cracks after the girl adds a mysterious new male Facebook “friend” named Shane.

Feely’s novel was inspired by the true story of 13-year-old Megan Meier of Missouri who committed suicide in 2006 after being taunted online through a phony MySpace profile of a fictional 16-year-old boy named “Josh Evans.” The profile was later revealed to have been created by a middle-aged neighbor who wanted to know what was being said about her own teen daughter. Neighbor Lori Drew was convicted for violating the Computer Fraud and Abuse Act in 2008, but her conviction was overturned on appeal in 2009.

Feely said she worked on the novel for three years and contacted the Megan Meier Foundation when she was ready to publish. Feely is donating a portion of her book sales revenue to the foundation.

Megan’s mother, Tina Meier, created a national not-for-profit organization in Megan’s memory to bring awareness of cyber-bullying to the world and to support families and children who have been bullied online.

“[The book] has some similarities,” said Tina Meier. “It’s a tribute to Megan’s story and other stories that families have gone through.” Meier said she considers Feely a “very sweet, caring woman.”

“Much has been written about ‘mean girls’ and the endless little tribes and misguided loyalties that form among teenage girls,” Feely said in her press release. “But a lot depends on the adult role models available to them — I wanted to highlight the fact that this same behavior exists among adult women.”

Feely said she always considered herself a children’s advocate. In the 1990s, she and a pediatrician co-founded Safe Kids Worldwide, an organization to keep track of “unintentional injuries” in children, including traffic injuries, drownings, falls, poisonings, burns and more.

Injuries caused by content on the Internet may not be visible, but they can be life-damaging. MySpace is long obsolete, but it seems adults are still behaving badly on the internet in front of the children they should protect.

Videos of parents shaving a teenager’s head on camera, pumping bullets into a daughter’s laptop, or shredding a child’s video games with a rider mower have all gained a cult Internet audience on social media and YouTube.

House Bill 4228 would have made it a petty offense for a parent to post online anything that would “coerce, intimidate, harass, or cause substantial emotional distress” to a minor.

The bill was stuck in committee and was never passed.

Ford said at the time he was urged to sponsor the legislation to counter the videos in Illinois and to bring attention to the magnifying power of Internet bullying and shaming, especially on children.

“Social media will be out there forever,” Ford said. “[A shaming video] can be spread and shared. It could be all over the world and a child could be damaged for life,” Ford said. “It could affect their chances for college or a job.”

Adolescent brains have a narcissistic phase where teens are painfully self-aware and easily embarrassed, said a Chicago psychology professor. Add the multiplying power of the Internet and real psychic damage can happen, said Joseph Ferrari, professor at DePaul University.

“To publically humiliate [a] child is never appropriate,” he said. “Shame is very powerful. With guilt, it’s someone who feels they’ve done something wrong and they can correct it. With shame, the person thinks their character is flawed.”

Tina Meier said the Megan Meier Foundation sponsors anti-cyber-bullying events in schools and libraries around the country and the foundation tells Megan’s story to thousands per year.

“We know no matter how much awareness or programs or laws that are passed, there’s never going to be end to bullying and cyber-bullying,” Meier said. “But when you have awareness, education and laws, people understand and pay attention.

“We tell them, there are resources; there are places to go for support. We are making that dent with adults and educators,” she added.

“We want kids to be empowered when they see [bullying] to stand up and say, ‘No, this is not OK.’”