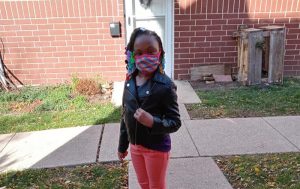 Amaria Osby, 8, was found dead in her bed on Wednesday, May 25, one day after her family was visited by the Department of Children and Family Services. (Photo from Andrea Hagler Facebook page)

Amaria Osby’s friends and family were to gather Tuesday, June 7 not to celebrate her eighth birthday, but to attend her funeral. Andrea Hagler, Amaria’s mother, won’t be there. She is charged with the first-degree murder of her daughter.

Amaria’s death once again drew scrutiny of Illinois’ child protection agency, the Illinois Department of Children and Family Services, for failing to protect the state’s most vulnerable children.

As a result, a DCFS worker and a supervisor have been removed from child protection duties, according to DCFS spokesman Bill McCaffrey.

DCFS has been involved with the family since Amaria was three, according to a DCFS timeline released last week. On Sept. 8, 2017, a report to the child abuse hotline came in alleging neglect after Hagler was arrested for driving under the influence and child endangerment.

An investigator visited the family the next day, but found no signs of physical abuse or neglect. DCFS provided a safety plan for Amaria. The agency found there was evidence Hagler neglected her daughter, stemming from the DUI arrest. DCFS initiated an intact family case to provide services to the family.

Hagler participated in substance abuse treatment and community services from Nov. 7, 2017, to March 21, 2018. The child protection worker noted that there were no concerns of abuse or neglect during the home visits and the case was closed.

For three years, DCFS had no involvement with the family.

But on March 23, 2022, the DCFS hotline received a call reporting that Amaria was being neglected. The call came after a domestic violence incident between Amaria’s parents at a Chicago restaurant. Police were called but no arrests were made.

According to DCFS’s timeline, an investigator tried to find the family the next day, but was unsuccessful. The timeline does not show any additional attempts by that investigator to check on Amaria. For the next 60 days, the agency did not have contact with the family.

On the 61st day, a second investigator visited Amaria and Hagler. They noted no concerns for physical abuse or neglect.

The day after that visit, on Wednesday, May 25, the child abuse hotline received another call regarding Amaria. She was dead.

A relative had found Hagler and Amaria in bed. Amaria had a plastic bag over her head. Another relative called 911. An autopsy found the second-grader suffered injuries during an assault and died as a result of asphyxiation.

The first investigator and a supervisor were subsequently relieved of their duties, McCaffrey said.

Amaria’s death is the latest high-profile death of a child who died after DCFS had contact with their families since December 2021.

The other children who died recently while under DCFS care were:

In addition to the deaths, Cook County Judge Patrick Murphy has found DCFS Director Marc Smith in contempt of court 11 times. Four of those cases have been purged after the children were moved to their department recommended settings. Smith still faces seven contempt citations in Cook County for failing to abide by court order to move children in their care to appropriate placements.

Several contempt cases have been consolidated with arguments to be made to the First District Court of Appeals in Chicago. No dates have been set.

As of Tuesday, a 13-year-old girl in a Chicago hospital whose case was the subject of the 10th contempt citation filed against Smith, remains in that locked psychiatric ward.

Smith faces a $1,000 daily fine for every day those 11 children remained in those settings. In Leah’s case, those fines totaled $26,000 as of Tuesday. Those fines have been stayed by an appellate court.

Smith has said there is a shortage of specialized placements for foster children and DCFS is trying to convince private agencies who provide services to families and children in state care to reinstate services that were folded during the budget crisis during the previous administration.