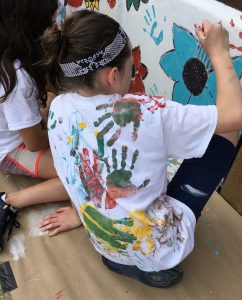 The Circle Avenue bridge in Forest Park on May 13 looked like a scene out of The Adventures of Tom Sawyer.

When the mischievous Sawyer was disciplined by having to whitewash a long fence, he famously talked his friends into doing his work for him by convincing them the task was great fun. He even got them to pay him for it.

None of the 114 individuals and groups who showed up at the “Cover Our Rust” public art project had to be convinced their task was fun, and they were happy to pay for the privilege. For their $30 fee, they received the right to paint a 10-foot long section of the bridge and leave their artistic footprint for years to come. The fee included paint, brushes, food and beverages for the day.

Meanwhile, Tom S … that is, Forest Park, cleaned up a public eyesore cheaply and enjoyably. Now passersby get to enjoy a pleasing array of artistic expression, and the artists have the pride of creation for years to come.

The project was the brainchild of Sally Cody, the village government’s executive secretary. Village officials have been pondering a way to clean up the several-hundred-foot-long bridge, which sees heavy daily vehicular and pedestrian traffic. In recent years the bridge’s concrete inner walls have grown increasingly unattractive due to accumulating rust stains.

Cody teamed up with the Forest Park Arts Alliance to invite artists young and old from all parts of the Chicago area to participate. “We need your creativity,” the alliance’s Facebook page heralded.

“This project will serve to bring the community together in a fun and creative initiative while beautifying the bridge,” the village’s website stated. 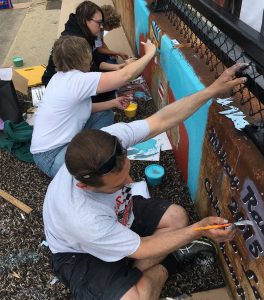 By any standard, they got that in spades. People were clearly thrilled at the opportunity for civic involvement and artistic expression.

With Circle Avenue shut down for two blocks between Jackson Boulevard and Harrison Street, between 200 and 300 people sat and milled about the bridge throughout the day as its walls were slowly transformed from dull reddish brown smears of rust to an amazing ribbon of colors hundreds of feet long.

“Who gets to paint a bridge,” asked LaGrange Park mother Maureen Gaughan. “It’s amazing.” She and her husband Barry sat in lawn chairs watching as their daughter Darby and four other girls painted a mural Darby designed to celebrate her 12th birthday.

“Having her be a part of the bridge is a big deal,” said Gaughan.

Across from the bridge on the east side near the CTA Blue Line entrance, Michael and Jill Racanelli sat on the sidewalk, working on a mural celebrating their son Mikey’s Chicago area 2015 Soap Box Derby championship. 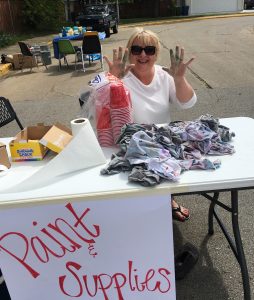 This June, when Mikey defends his title on that same Circle Avenue Bridge, he’ll be able to look over at that mural.

A hundred feet south of the Racanellis, Forest Parker Katie Redmond and Becky Davis of Brookfield sat working on a mural inspired by John Lennon’s classic song “Imagine.” The original artwork hangs in the bedroom of Redmond’s two daughters. Now Redmond is sharing it with the world.

“We’re putting our peace message together in music.”

More than a few murals were created by artists hired by others to put their message on the bridge.

Armando Arceo of Chicago was hired by Tim and Dorothy Gillian of Forest Park to paint a piece featuring a stately Prairie style house with the sentiment “Will always call Forest Park home.”

Kathy Kucia, who chairs the village’s diversity commission, had both a simple message and a simple design — a white background with “diversity” in black lettering.

“I’m painting it on behalf of diversity in the community,” Kucia said. She acknowledged the project’s cosmetic benefits as well, saying, “It’ll be a definite improvement.”

Like any event of this scale, many volunteers were involved.

Karen Dylewski, the director of the Forest Park Community Center, said she’s not much of a painter, but wanted to help. Like many others, she expressed amazement at the scope of talent and imagination of the registrants. 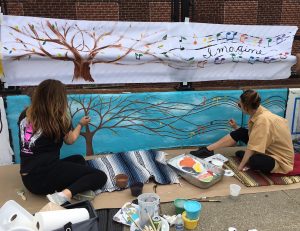 “Oh my God, I think it’s so cool,” she said, smiling. And while she may not have participated in the actual painting, she managed to get covered with paint nonetheless, while handing out supplies to the hundreds of participates, and didn’t mind a bit.

Wagner’s colleague, Lin Beriback, who is serves as treasurer of the Forest Park Library board, was impressed by both size and spirit of the turnout. “It’s amazing the diversity of design and the people working on it.”

“The theme was community,” said Wagner, “and that’s what this is.”