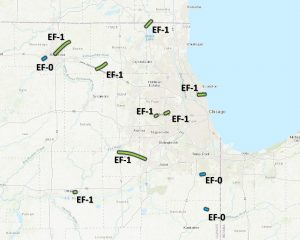 This National Weather Service map showing the locations of the estimated 11 tornadoes spawned by the Aug. 10 derecho storms. (Courtesy of NWS)

The National Weather Service has confirmed that at least 11 tornadoes were spotted across northern Illinois during a series of Aug. 10 derecho storms.

Derecho is defined as a line of intense, widespread, and fast-moving windstorms and sometimes thunderstorms. In the Aug. 10 event, all but one were rated EF-1, which is described as “moderate.” The most powerful is an EF-5, which can produce winds of more than 200 mph.

Tornadoes are listed in chronological order:

Rockford to Caledonia: This tornado was associated with the same supercell thunderstorm that produced an initial brief EF-0 tornado immediately southwest of Rockford, but it has been determined these exist as two separate tracks. The tornado developed as the main line of thunderstorm caught up with, and eventually merged with, the parent supercell with this path starting near Guilford Road just north of Rockford College before heading northeast. Significant tree damage, consistent with EF-1 wind speeds, occurred in a localized area immediately east of Rock Valley College west of North Perryville Road. The tornado continued northeast, crossing I-90/39, producing sporadic damage before lifting near Caledonia Road.

The tornado started south of Marquette street west of Michigan street and progressed eastward. The tornado impacted several businesses ripping off well-anchored roofing material and snapping a power pole at its base. It was here that the max intensity of the tornado was reached with peak winds of around 100 mph. The tornado then continued eastward ripping shingles off roofs of buildings and houses just west of Route 23 and shredding trees.  The tornado is believed to have lifted in an inaccessible forested area east of the Fox river. Eye witnesses indicated the tornado may have had multiple vortices with clear rising and rotation motion of debris.

Southeast Marengo:  This tornado started on Harmony Road immediately southwest of I-90 near the McHenry/DeKalb county line. Tree damage consistent with winds around 95 mph occurred immediately northeast of I-90. The tornado heavily damaged a single-family home near Maple street before heading northeast and lifting near Coral and Dunham roads.

Yorkville to South Plainfield: The tornado started on the far south side of Yorkville. Eyewitness accounts indicate debris was lifted and twirled, consistent with a tornado.  The tornado then progressed east-southeastward producing damage to trees along State Route 126 toward Schlapp Road.  The most significant damage was found east of Schlapp Road along Wheeler road where trees were mangled, a farm building was destroyed with debris deposited in a nearby field, and a large grain bin was bent  inward. Wood panels were thrown into the ground leaving scour marks in the grass.

Six power poles were snapped along Ridge Road. This is where the tornado likely reached peak intensity with winds of 105 mph. The tornado continued southeast into neighborhoods south of Renwick road producing mainly tree damage, and ended just before I-55. A swath of damaging winds consistent with speeds of 70 to 80 mph continued into Crest Hill producing prolific tree damage.

Wheaton: The same storm which produced the brief Wheaton tornado produced another region of tornado damage immediately east of I-355 just east of Lilacia Park. The tornado also continued in a northeasterly direction, uprooting trees — some snapped at the trunk — as well as causing some house damage including a few with substantial roof damage. The worst damage occurred near and around the Lombard Common just south of St. Charles Road. Damage eased considerably on the north side of the circulation, with a more gradual drop off in damage to its south. The tornado lifted just northeast of the Jefferson Middle School.

Lombard/Villa Park: The same storm which produced the brief Wheaton tornado produced another region of tornado damage immediately east of I-355 just east of Lilacia Park. The worst damage occurred near and around the Lombard Common just south of St. Charles Road. Damage eased considerably on the north side of the circulation, with a more gradual drop off in damage to its south. The tornado lifted just northeast of the Jefferson Middle School.

Park Forest: A brief tornado touched down very close to the Cook/Will County line near Shabbona Drive. It tracked northeast where it produced a localized area of fairly widespread tree damage consistent with high-end EF-0 wind speeds. The worst damage was confined to a small area near Marquette and Somonauk Parks, although very little structural damage was noted in this area. The tornado lifted over Schuberts Woods Forest Preserve. Sporadic straight-line wind damage continued east towards State Street east of South Chicago Heights.

Rogers Park, Chicago: This tornado initially touched down south of the intersection of Crawford and Touhy Avenues in the suburb of Lincolnwood. It then continued moving just north of due east before moving offshore near the Jarvis and Fargo beaches. The most intense damage, consistent with that of a high-end EF-1 tornado, occurred within approximately one mile of the lakefront, as well as near and within Phillip Rogers Park.