The Evanston Art & Big Fork Festival over a three-day weekend in August drew more than 30,000 people to a section of downtown Evanston.

The event began Aug. 18 at Sherman Avenue from Clark to Davis Streets and Church Street and from Benson to Orrington Avenues. 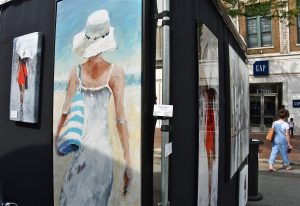 A passerby in blue, also carrying a bag over a left shoulder, walks past the booth of artist Aziz Kadmiri of France, who created the artwork on the left. (Photo by Karie Angell Luc/for Chronicle Media)

The festival featured the work of 100 artists.

“Art and love for me is just one thing,” said French artist Aziz Kadmiri, who sold paintings of scenes of Paris or beach scenes which looked like they could be of the Evanston Lake Michigan beachfront.

“Evanston is a culmination of great food, people and atmosphere, and we’re showcasing all of that at this event,” said Elise Gray-Gaillard of Evanston, a 2013 Evanston Township High School graduate, who staffed the booth for the French bakery, Coralie Patisserie of Evanston. 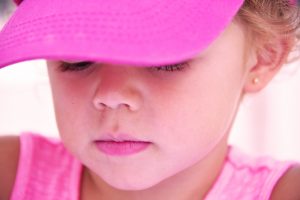 Arabelle Borges, 2, of Skokie, is at a table drawing. (Photo by Karie Angell Luc/for Chronicle Media)

Music featured local performing artists. The Spinal Cord Injury Association of Illinois was the charity chosen for the Green Ribbon Project, a philanthropic missive of the festival. 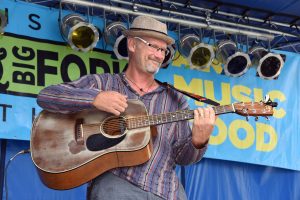 Participating artists put a green ribbon on a piece of their choice in their booth and if the piece was sold, the artist agreed to give 10 percent of the proceeds to the Spinal Cord Injury Association of Illinois.

Amy Amdur of Highland Park, president of the Highland Park-based Amdur Productions, was pleased with the weather and attendance turnout, talking about the success of the growing festival on a sunny Sunday morning.

“There’s something for everyone,” Amdur said.

With global events this summer causing people to examine ways to pursue peace, bringing neighbors together at a community festival is more important than ever, Amdur said.

“The reason why the Evanston Art & Big Fork Festival is a community builder is it’s also a community healer,” Amdur said. 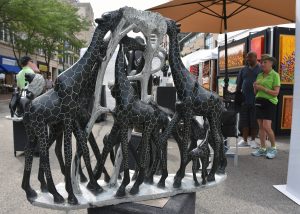 Amdur said the dining portion of the event also allowed people to share conversation and make memories. Friends, families and neighbors were encouraged to sit at tables, surrounded by art and music.

“I think that art has a huge power to heal,” Amdur said.

“Studies have shown that art is healing,” she said.

Best of Show went to Indianapolis artist Peter Rujuwa, a sculptor who works in serpentine stone. For 35 years, Rujuwa has made art his full time career, he said.

How did it feel to be Best of Show, receiving that coveted blue and yellow ribbon? 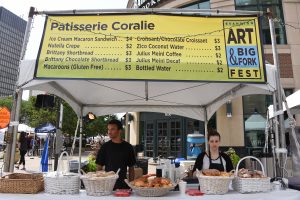 “It feels good, it feels good,” Rujuwa said with a smile, minutes after finding out on Sunday morning that he won Best of Show.

“It’s just an honor because there are so many talented artists,” the sculptor said.

—-  Evanston Art & Fork Festival a feast for the senses —–