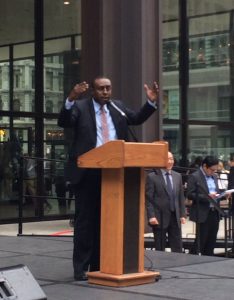 Former City Colleges employee Sharod Gordon calls on Chicagoans to bring peace back into communities during a 2016 rally. Gordon has been charged with wire fraud for allegedly steering City College contracts to vendors in exchange for kickbacks and other payments. (Twitter photo)

A former vice chancellor for City Colleges of Chicago has been charged with obtaining kickbacks and other payments from vendors.

Sharod Gordon, 45, of Oak Park, has been charged with 16 counts of wire fraud for allegedly steering contracts for community canvassing and flyer distribution services to vendors in exchange for payments.

City College employees or associates of Gordon formed some of the vendor companies to receive the contracts, the indictment alleges.

The indictment was returned Nov. 19 in U.S. District Court in Chicago. The Chicago office of the Federal Bureau of Investigation conducted the probe. The Office of Inspector General for the City Colleges of Chicago provided assistance in the investigation.

In addition to Gordon, the indictment charges seven other defendants with participating in the scheme:

Each count of wire fraud is punishable by up to 20 years in prison, while the maximum sentence for each false statement count is five years.

Arraignments for Gordon, Vazquez, McQueen, Smith, Orr and Payne were scheduled for Nov. 26. Capel and Stokes are scheduled to be arraigned Monday (Dec. 2).