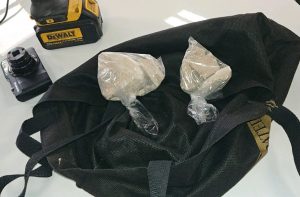 Federal authorities on March 20 charged five people with the distribution of heroin and a sixth with numerous weapons violations.

The criminal complaints stem from a year-long investigation into the purchase and distribution of heroin by Hillside resident Windell Reedy and others in Maywood, Bellwood and Hillside, as well as Memphis, Tenn.

Agents confiscated approximately 700 grams of heroin, some of which tested positive for fentanyl, and more than $15,000 in cash.

The investigation was conducted under the umbrella of the Organized Crime Drug Enforcement Task Force, a partnership between federal, state and local law enforcement agencies that works to “identify, disrupt and dismantle the most serious drug and weapons trafficking organizations.”

According to one criminal complaint, Windell Reedy, 43, of North Wolf Road in Hillside, operated a drug trafficking organization in the western suburbs.  A source cooperating with law enforcement purchased various quantities of heroin from Reedy on multiple occasions between February 2017 and February 2018.

The Reedy organization is alleged to have delivered as much as two kilograms — 4.4 pounds — of heroin.

Public records show Reddy was sentenced to at least four years in the Illinois Department of Corrections in 2011 for manufacture and delivery of heroin.

Windell Reedy allegedly worked with his uncle, Danny Reedy, 56, of Bloomingdale, to purchase and obtain wholesale quantities of heroin and distribute it through street sales in the near west suburban area. The drug was also transported to Memphis, Tenn. in wholesale quantities by Ronald Scales, 53, an alleged drug courier who allegedly delivered heroin and brought back cash proceeds from the sales to Reedy.

The complaint also accuses Daryl Kimbrough, 48, of Bellwood, of allegedly performing quality tests on the heroin obtained by the Reedys, and with distributing the drug.

In a separate criminal complaint filed in February, Kenneth “Lil Don” Logan, 38, of Maywood, was charged with being a convicted felon in possession of a firearm.  Prosecutors allege that Logan sold rifles, handguns and ammunition to a federal cooperating source on four occasions in November and December of last year.  The transactions allegedly occurred in Maywood in the area around South 18th Avenue and St. Charles Road.

Logan is a five-time convicted felon who has served four prison sentences. He faces up to 10 years in federal prison on each charge.

“I was making over two grand a day, that was just on bags, cause I’m putting in weight [selling large quantities of narcotics],” Reddy allegedly said. “Now I need (someone to) show me how to make more money, cause I ain’t happy with it.”

Reedy was also apparently aware that he might be under federal scrutiny. On at least one occasion, agents recorded him expressing concern that authorities could be listening in. He directed an associate to switch to a different cell phone in order to avoid federal surveillance.

But in early February, agents who’d had Reedy and others under electronic and physical surveillance for months, listened in to cell phone conversations as Reddy spoke with others in preparation for transporting a wholesale quantity of heroin from Chicago to Memphis.

On Feb. 5, drug enforcement agents aided by State Police stopped the Lincoln SUV owned by Reedy and driven by Scales, on I-57 in Fayette County. After a drug sniffing dog alerted to the presence of narcotics in the car, agents searched the vehicle and seized 300 grams — more than half a pound — of heroin.

The next day, agents raided Windell Reedy’s apartment and arrested him. They seized a total of $8,034 from Reedy, on his person and from several places throughout the apartment.

The heroin distribution charge against Windell Reedy is punishable by up to 20 years.

The conspiracy charges against Danny Reedy, Scales, Baker and Kimbrough carry a mandatory minimum sentence of 10 years in prison and maximum of life.